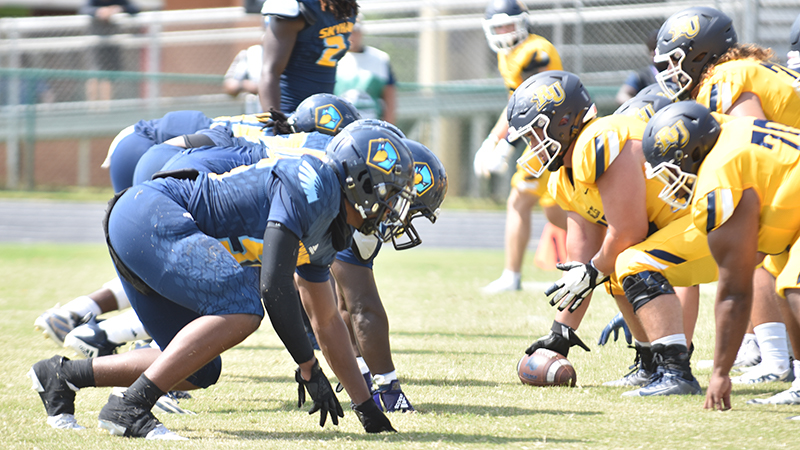 Point University’s football team traveled to Waleska, Georgia to seek revenge against a Reinhardt team that beat the Skyhawks earlier this season, but Point’s defense struggled to stop the Eagles’ rushing attack in their 48-21 loss on Saturday.

The Skyhawks have been dealing with illness and injuries over the past couple weeks, and they couldn’t get healthy enough to beat the number nine team in the country.

“That’s an even bigger challenge. This has been one of the oddest seasons I’ve ever been a part of. We seem to always have some form of adversity we’re taking on. The flu kicked our butt. Two-thirds of the team got it at some point. The coaches even had it.”

The Skyhawks once again turned to true freshman Austin Adcock to lead the offense on the road, and he did a good job in a second career game.

Adcock finished 10-of-22 with 197 yards, two touchdowns and one interception.

“Austin came in relief, and he did very well,” Zeiders said.

The Skyhawks started Mitch Gossett, but he left the game due to an ongoing shoulder injury.

The offense had its fair share of struggles with no third down conversions on 11 attempts, but it was the defense that struggled the most.

Reinhardt put up 477 yards of offense with 323 of them being on the ground.

Reinhardt averaged 5.9 yards per rush on 55 carries, and the Skyhawks couldn’t stop them.

Point is only allowing 117.7 rushing yards per game this season.

“Our two starting defensive tackles were out,” Zeiders said.

“It was a lot tougher not having them. The guys who replaced them haven’t started. We struggled early on. We played well the first couple series, but we didn’t convert on a fourth down, and they started taking advantage of everything. We gave up a 65 yard touchdown run. Two simple injuries can change so much.”

The injuries in the trenches also didn’t help on offense where the run game put up a season low 50 yards.

“We didn’t do the greatest job of putting ourselves in a good position,” Zeiders said.

“We had several third and longs, and they were able to tee off on us. They took advantage in a hurry. We didn’t help ourselves.”

The Skyhawks also had a season high 110 penalty yards, but Zeiders feels like they were more in-play mistakes than mental errors.

“We’ll continue to talk about it and work on it. I wasn’t disappointed in a lot of them. There were a couple that had me frustrated. They were hitting Mitch and Austin a little late most of the game, and none of those were called. We just have to continue to work on it. If it’s a pre-snap or mental penalty, that bothers me. If you get called for holding, I can’t change that. That’s an in-play penalty and a judgement call. Stupid personal fouls after the play bother me.”

Point had a season high 297 passing  yards, and it was enough for Zeiders and offensive coordinator Greg Forest to open up the quarterback competition.

“Austin is coming along,” Zeiders said.

“He’s a young guy. Both quarterbacks were plagued a little bit by drops. We have to help them out more at receiver. They’re both throwing the ball better. They’ll have to be out here in the spring and summer to work on timing. They both made plays, but Austin made more. They’ll have a battle all week in practice to see who’s going to start. We’ll make a final decision heading into Saturday. I feel comfortable with either one of them.”

Zeiders does want to see the run game improve, but the Skyhawks also lost several running backs throughout the course of the season.

“It didn’t help that we started three freshman offensive linemen while our top four running backs are hurt,” Zeiders said.

“We’ve had more injuries at running back than any other position. Sensir Carnes sprained his MCL. Adam [Sanders] and Trey [Turner] both had foot surgery. Nadir [Mitchell] hurt his foot. The other guys have been OK, but it’s been a challenge all across the board.”

Point has been forced to limit themselves in practice the past couple weeks due to their injuries.

“We’re going to practice the way we have,” Zeiders said.

“It’ll be a lot of shortened practices. We normally have two hour practices, but now we’re practicing for an hour and a half. We just need to get the work we need in. We’re not hitting as much. That’ll be a point of emphasis this spring. Reinhardt was more physical than we were. You can’t work on that in season, or people will get hurt.

The Skyhawks will finish their season at St. Andrews on Saturday in a battle for third in the conference.