‘It did not disappoint.’ Family drives from Birmingham area to attend third annual Rockingfest in LaFayette 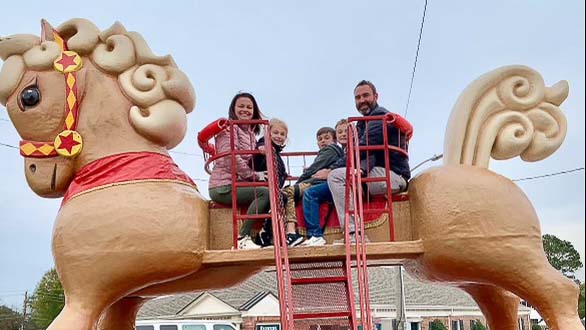 The third annual Rockingfest on the Square attracted families to LaFayette from across the state. Angela Burton and her family drove all the way from Birmingham on Saturday because her kids wanted to see the World’s Largest Rockinghorse.

“I wanted to take my children to see the World’s Largest Rocking Horse because that’s just a really cool thing to say you’ve done,” Burton said. “It did not disappoint.”

“I just want to thank everyone for coming out and showing LaFayette some love for this event,” said GVACC Executive Director Carrie Wood. “It was a great day for the city of LaFayette.”

Burton and her family attended the Rockingfest for the first time this year. Burton, who is originally from LaFayette, was glad for an excuse to visit home.

“It was a sweet, little magical day,” Burton said. “Anytime going back home, especially around the courthouse, it’s always so pretty.”

Burton said that her kids loved the rocking horse. Their favorite attractions were the ice skating rink and the Snowzilla.

“I had no idea that all the inflatables and the rocking horse were all free, which was super awesome,” Burton said. “Then, of course, the World’s Largest Rocking Horse, how can you not be excited about that?”

This year, the Rockingfest on the Square saw more arts and crafts and food vendors than ever before. According to Wood, the goal for this year’s event was to get 80 vendors, and they reached 87 on Saturday.

“We appreciate the participation of our vendors and sponsors,” Wood said. “Without our sponsors, this event would not be possible.”

One vendor that received a lot of attention was the family-run business Roman’s Bear Club. Co-owners Veronica Reid and Nikedra Sanks ran a booth with a do-it-yourself stuffed animal set-up. The business began when Reid rented the bear-stuffing machine for her grandson Roman’s birthday party, Sanks said.

Roman’s Bear Club is a mobile party planning business. Services that they offer include school and home parties as well as venue parties. Some games include ride-on toys, a 360 photo booth and bear-stuffing machines.

“We’ve had a pretty good turnout so far,” Sanks said. “Our very first event a year ago was in LaFayette.”

Santa Claus arrived to take pictures at noon. Families lined up across the street to give their children the chance to tell Santa their Christmas wishes. Also in attendance was touch-a-truck with representatives from the Chambers County Sheriff’s department, Fire Department and EMT.

“It was a great way to kick off the holiday season,” Burton said. “We can’t wait for next year. We definitely want to make it a tradition to get down there every year.”