Jamarious Martin happy to play football in his senior season 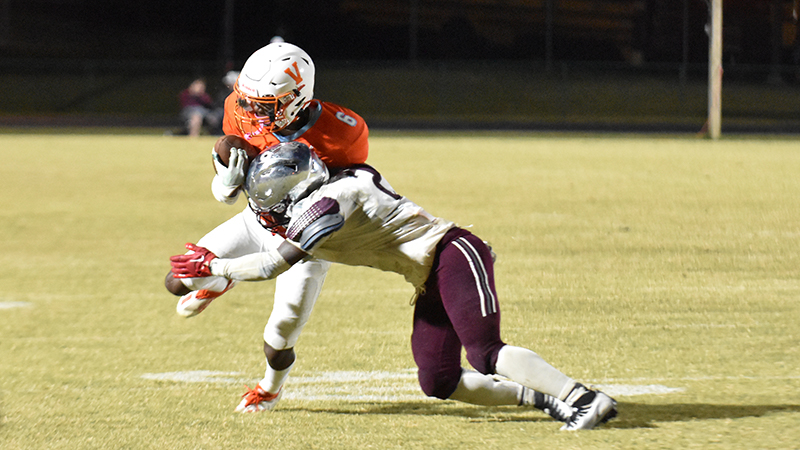 Valley senior Jamarious Martin is known for his skills on the hardwood, but he joined the football team and made his name known as a receiver for the Rams in his final year.

Martin is a Ram lifer, and he started playing basketball at the age of six.

“I played pick up ball one day, and then started dribbling,” Martin said.

“I just got better and better.”

He played basketball for W.F. Burns Middle School, and then spent four years on Valley’s team.

He decided to join the football team in his senior year because Valley basketball coach Marshon Harper encouraged him.

“My coach wanted me to come out so I did,” Martin said.

“I feel like I did pretty good. I did better than I thought I would do considering it was my first year.”

Although Martin excelled at the slot receiver position, he still likes basketball more.

“It just always stuck with me,” Martin said.

“I’ve been playing it since I was a kid. When I got into high school, I just focused on basketball more.”

“I like the crowd,” Martin said. “It gets the game electrified when I’m playing with my teammates. It makes the game what it’s supposed to be.”

Martin feels like basketball has taught him several life lessons.

Valley’s basketball team will have a lot of talent this year, and Martin is looking forward to finishing strong with his teammates.

“I’m looking forward to having a great regular season,” Martin said. “We just have to take it game by game. We have to compete for a state championship.”

This is the first year Martin had to play a sport before basketball season, but he feels like it has helped him more than anything.

“I feel like playing football helped me get stronger and more physical on the court,” Martin said. “I feel like I can bring my physicality from the field to the court.”

Martin’s favorite memory while playing at Valley was the Rams’ big win over Opelika last season in basketball.

“The student section was turnt the whole time,” Martin said. “We had a good game, and we celebrated afterwards.”

Martin may also be one of the last senior basketball players at Valley High.

“Most people treat it like a big deal, but I feel like I can fill that role,” Martin said. “I can still make a name for myself this year.”

Martin will miss his teammates the most when he graduates.

“I’ll miss my teammates and coaches since I’ve been here all four years,” Martin said. “I’ve been with them my whole life.”

Martin did enjoy his one year playing football.

“I felt comfortable,” Martin said. “It made me feel like a kid again when I was catching the ball. I just tried to get upfield and score touchdowns. I enjoyed senior night. Nobody expected us to win, but we ended up coming up with the dub, and I caught a touchdown.”

Martin plans to play basketball in college, but he isn’t sure where he’s going to play yet.

He even mentioned that he would play football in college.

Martin plays point guard, and he feels like he does a lot well on the court.

“I handle the ball well, and I can score easily,” Martin said.

If Martin doesn’t play a sport in college, he still wants to get a degree.