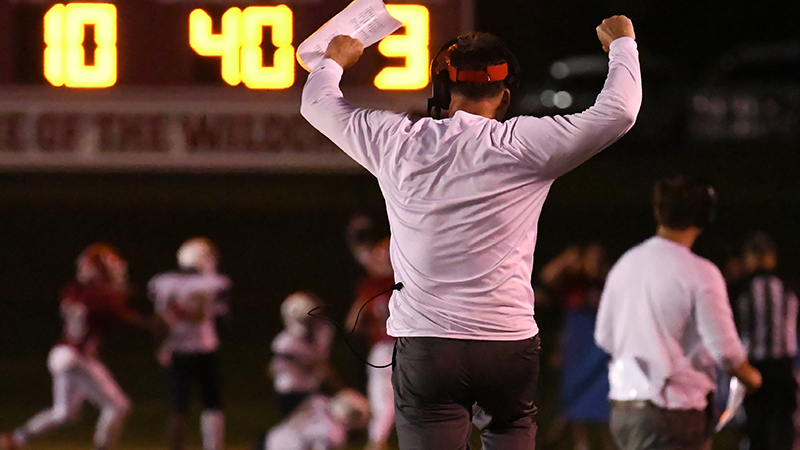 From a one win season to one win away from a state title, Springwood first year head coach Joey Burch led the Wildcats to their first state title in 12 years this season, and he’s beginning to establish a culture that will bring life to the football program and the community.

When Burch took over as head coach and athletic director in July, the football program was shrouded with uncertainty as they made the move to 8-man football with a coach who took over with about a month until their first game.

Burch was on the staff as the defensive coordinator and PE teacher, but he took on the challenge of bringing life back into the football program.

Springwood headmaster Kim Baylis also took over her role earlier this year, but she knows Burch’s impact on the program.

“He came on in the summer of 2021, and he had just retired from public school administration,” Baylis said.

“He taught for 30-plus years, and he just wanted to be in a small school environment where he connected with the kids. He didn’t want to do all the headache principal stuff.”

Burch supported the administration and is also the head coach of the track and field team.

“He had coaching ability, and the students loved him,” Baylis said.

“I needed another administrator that could work with kids and parents. He clearly could do that well. When the role of athletic director became available, we sat down and decided what was best for the kids. There was a lot of disappointment with our football program, and he said he could do it.”

Burch already built relationships with students and parents of the Springwood community, and his ability to coach football only took them further.

“He had experience being an athletic director and head coach,” Baylis said.

“He turned around football programs in his time at public schools. He just built a team of coaches that were like minded. David Hudson, Hunter Plant and Michael Foster were key. He rallied other people to help him rebuild a program. He also researched 8-man football in the spring.”

Baylis feels like Burch has impacted not only the athletic program but the Springwood community as a whole.

“It’s hard to quantify his impact,” Baylis said. “Most of the administrative staff was entering new roles at the beginning of the year. We knew this was an opportunity to rebuild relationships with the parents, students and the community. Joey has done a tremendous job at doing that. He’s built trust with the students. In the first parent meeting he was at, he said that he wanted to give the students the best experience possible. He said it was about the kids. I think he’s been unwavering in that commitment. He spent the whole summer redoing the locker room. He has a lot of construction background. The kids have a place to be proud of. He completed the weight room. He helped provide a quality program, and he showed that he cared about the boys.”

Although Baylis is spending her second year at Springwood, she feels like the atmosphere around the school is much better than it was last year.

“I don’t have the years of perspective that others might,” Baylis said.

“Compared to last year, it’s much better. It’s embarrassing to lose all the time. When you lose a lot of games, the students don’t feel like a team. He’s brought a lot of pride to the school. Students are excited to come watch games. Even at the first game we had a big student section. We’re cheering for each other, and we’re proud to be Wildcats. We’re excited moving forward into the basketball season. It just really feels like a community. Joey’s role in the football program has led the way.”

The parents have also enjoyed Burch’s impact on their players and the school.

“When I first met him, he was kind of reserved,” Strickland said.

“Throughout the year, I would see him a lot on campus. He sold me when he said he would make Springwood his home. He and his wife love their grandkids. To be family oriented and give up your life where you are speaks volumes about the type of person he is. I like that about him over anything. He also helped mature these kids.”

Strickland feels like Burch has made a large impact on both her son and the community.

“He drives the kids,” Strickland said.

“The tenacity to take the underdog and do as well as he’s done speaks volumes. Burch came in with his years of experience. We just trust God and pray every step of the way. I just think he’s awesome as a person. I reached out to him on several occasions about a grade, and he was very tentative about his input.”

“I thought he was very nice and had a positive attitude,” Sides said.

“He really seemed to care about the boys and the program. We went through a lot as a program, and we weren’t really sure what would happen. He was honest up front that we may not win a game or that we may only win a few, but our goal was to make it to the state championship. That stuck in my mind.”

Sides’ sons, Cameron and Tucker, both made an impact on the field in  the state title game this season.

“Cameron is a senior, and Tucker is a ninth grader,” Sides said.

“Cameron was skeptical about playing football this year. He was really down about it, but Burch made a positive impact on him. He really cares about the program. He made the kids work. Coaches in the past made practice an optional thing. Tucker is very well versed in football. Burch made a big impact on him. He pours positivity in these kids. He doesn’t knock them down when they make a bad play.”

Sides also feels like things have changed with the football program as a whole thanks to Burch.

“It’s just a whole different culture. Every game was packed. 8-man football isn’t even that different. The kids as a whole love him at the school. Even my daughter, who’s only in third grade, loves him for PE. He’s a very honest person. He loves the kids and loves Springwood.”

Cook knows that Burch has been important to the school since she’s the football representative for the Springwood athletic association.

“I met him when Cayden decided to do shotput. He was fantastic then. We came from public schools, and we were used to a certain discipline that’s different from private schools. He’s kind of funny because he doesn’t give anything away with his facial expressions. I can never tell if I’m aggravating him.”

Cook feels like Burch has been important to Cayden.

“Cayden never really had a problem with talking to people. I can only think of one coach that he didn’t get along with. Burch told me that Cayden reminds him a lot of himself at that age. Burch is the director of athletics and academics, so he stays on top of those players. He uses tough love. He knows that Cayden has so much potential. It meant the world to Cayden to finally have someone who said they wouldn’t turn their back on him in his senior year. He works with Cayden on putting his name out there, and no other coach we’ve had at Springwood has helped him the way Burch has. He doesn’t boast, and he’s not going to give one player more attention than the other. I couldn’t be happier with how this season has gone. I’m grateful that he’s who we had.”

Cook also knows that the players found new motivation under Burch and his staff.

“We didn’t have a single player quit this season. Even with all the uncertainty of how this season would go. Everyone stayed and fought through the entire season. That’s a big testament to coach Burch.”

“He tried to say he did it for us, but he didn’t even know he was going to coach this year,” Garrett said.

“He thought he was going to be a defensive coordinator. We had a coach for about two or three weeks, and then he stepped up. In my time at Springwood, we didn’t have a coach that was on us. He pushed us.”

Senior Cayden Cook also knows that Burch has the program in the right spot.

“We revived the program,” Cook said.

“If there’s a message to give to people coming back or anybody in our area, it’s that Springwood is the place to be,” Cook said.

For coach Burch, he had to unexpectedly take over a struggling program and convince the community to buy into 8-man football.

“I spoke to a lot of coaches as well. I talked to some guys who have been playing for a long time in Missouri because it’s huge out there. I also talked to coach Bell at Southern Prep even though we’re rivals. He was a great help as far as X’s and O’s. He’s become a good friend of mine, and we talk every week about how to get better and improve the game.”

Burch described how he was able to take over the program in a short time’s notice.

“When coach Pardue resigned, we looked at all the options,” Burch said.

“As an administrator, my focus was what’s best for the kids. We came to the conclusion that I would be best because I knew the kids. That made the transition a whole lot easier. We didn’t know if we could get the kids to believe in the program again.”

Burch thanks his players for helping the Springwood community buy in to the program.

“Some of the kids that have played through the down years somehow believed in me,” Burch said. “I saw people in the Auburn-Opelika come up to me and congratulate me on the year we had. That sells Springwood and gets people excited.”

The last time Burch was a head coach was at Danville High in north Alabama back in 2009.

Before the state championship game, Burch wanted to calm his players down and not let the stage get too big.

“I wish I could say they enjoyed the playoffs more than I did,” Burch said.

“I had a lot of anxiety wanting to perform so well. The kids felt a lot of pressure too. We were uptight all week long. We didn’t give a huge rah rah speech. We hadn’t experienced that crowd noise.”

Burch is excited for the future of Springwood football.

“I feel like this team helped to change the culture,” Burch said.

“I hope that rolls over into other sports. Leading this program has been fantastic. I think the future is fantastic. We had 11 seniors, but we have some kids at school after our celebration and said they wanted to be a part of it next year. Maybe with the schools combining, some kids will want to join us. Maybe all the stress took years off my life, but working with these kids added to it.”