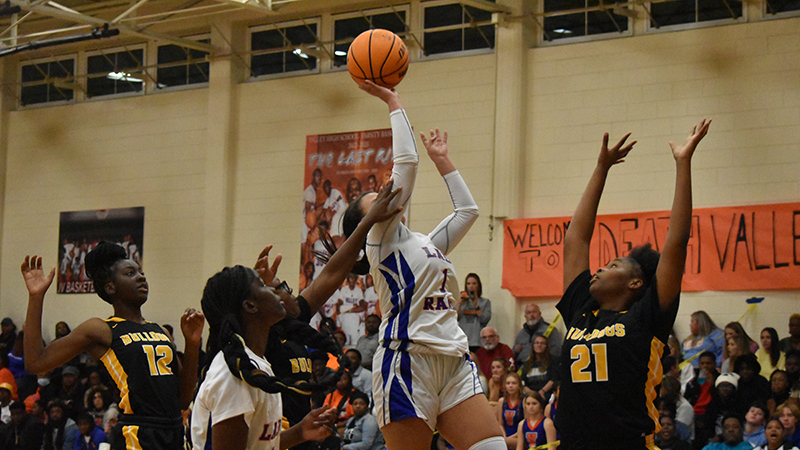 Speed and size were the difference between the Rams and Bulldogs in Valley’s first varsity girls game, but size won in the end as the Rams’ presence in the paint proved to be too much in Valley’s 45-31 win on Friday night.

For first year LaFayette head coach Thaddeus Tucker, he knows that the Bulldogs have to work together as a team to get their first win of the season.

“We had too many turnovers,” Tucker said.

“They started pressing us, and we just had too many turnovers. That turned into easy buckets for them.”

The first half was a different story for both teams as each excelled at something different.

While Valley was able to use their size to dominate the paint, LaFayette’s speed led to several steals and opportunities on the perimeter.

The Rams took a quick 5-0 lead, but the Bulldogs were able to take an 8-7 lead thanks to a couple three point shots from Aeronique Kyles.

The Bulldogs dominated the early stages of the second quarter going up 16-9 at one point, but the physicality of Valley took over.

Ten first half fouls from the Bulldogs let Valley come back and tie it at 16 heading into halftime.

Tucker was pleased with his team’s first half performance.

“I was ecstatic, but maybe we  got tired in the second half,” Tucker said.

Valley head coach George Grimes knows that the Rams needed to get over their first half jitters.

“It was our first game,” Grimes said.

“We were a little too overconfident, but we settled in and got back to work.”

The Rams woke up in the second half as their defense forced several turnovers to limit the Bulldogs to only 15 points.

The Bulldogs did take a 26-22 lead in the third quarter, but giveaways plagued LaFayette’s offense, and Valley never looked back.

The Rams scored 19 unanswered thanks to Darcee Wright and Kenda Watson, and the Bulldogs could never recover.

Grimes is pleased with how his girls started the season.

“We had the ball well off the glass,” Grimes said.

“We have to get better at being consistent and making shots in the paint. It was a pretty good game overall.”

Tucker feels like his team is on the right path despite the loss.

“We need to stay the course,” Tucker said.

“If we can maintain and focus, we’ll be fine. We have to practice the press. It’s on me. I didn’t prepare them for that well enough.”

Grimes feels like there’s still plenty to work on before the next game.

“We don’t have time to work on anything because we have to turn around and play at 11 in the morning,” Grimes said.

“We have to become more consistent when it comes to making easy baskets. We have to continue to play defense.”

Both Valley’s Kenda Watson and LaFayette’s Aeronique Kyles led the scoring with 20 points each.

The Lady Rams will play Troup at home on Saturday morning while the Bulldogs will have a long break before their next game against Handley on Nov. 28.