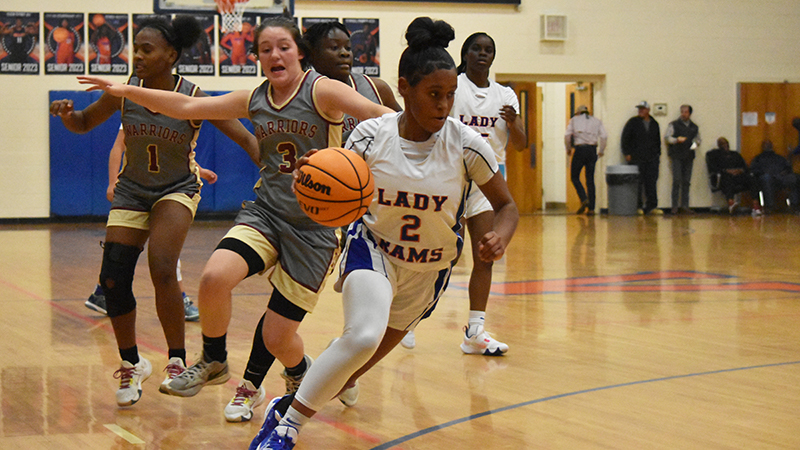 It was the Valley girls basketball’s third game in four days, and they just couldn’t seem to find answers on either side of the ball in their 72-48 loss to the Russell County Warriors on Monday.

The Lady Rams got off to a fast start going up 8-1 thanks to four points from Kenda Watson, but things just started to fall apart after the big lead.

The Lady Rams had 10 fouls in the first quarter alone, and it ended up costing them in the end.

After being up 15-9, the Lady Rams let the Warriors score 12 unanswered thanks to Russell County’s Kamya Kates and McKenzie Ward, who each had four points in the run.

The second quarter was all Russell County as the Rams struggled to score in any way, and they couldn’t stop turning the ball over.

The Lady Rams were outscored 18 to 9 in the second quarter, and they couldn’t close the lead.

Darcee Wright was the leading scorer for the Lady Rams in the first half with 10  points.

Things didn’t get any easier for the Lady Rams in the third quarter as their offensive woes continued.

The Warriors were able to dominate the transition game, and the Lady Rams couldn’t stop Russell County’s Brianna Lacey and McKenzie Ward, who finished with 18 and 16 points respectively.

The Warriors never went on a big run in the third quarter, but they slowly extended the lead to make it 54-32 at the end of the quarter.

Valley did have a resurgence in the fourth quarter thanks to Darcee Wright, who scored 15 in the quarter.

The Lady Rams struggled on defensive rebounds, and the Warriors were able to capitalize.

Wright finished as the leading scorer for the Lady Rams with a season high 27 points,

Valley’s next leading scorer was Aniyah Robinson with eight points.

Valley head coach George Grimes couldn’t be reached for comment, but the Lady Rams will look to bounce back on the road against Bullock County on the road on Tuesday after a 1-2 start.