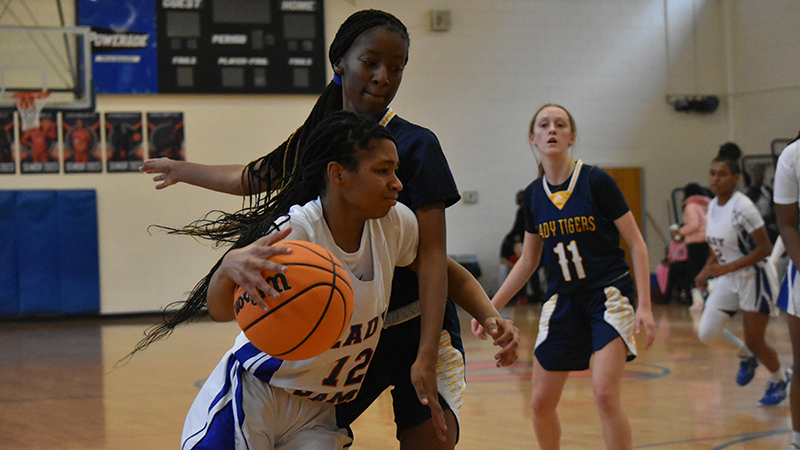 The Valley girls varsity team struggled defensively as Alexcia Murphy and the Troup Tigers slowly wore them down in Troup’s 63-45 victory on Saturday.

The Lady Rams struggled on both sides of the ball as they played their second game in under 24 hours.

Murphy led both teams in scoring with 30 points on 50% shooting.

Valley head coach George Grimes knows his team has to get better on defense before its next game on Monday.

“We were just tired,” Grimes said.

“Murphy had an excellent ball game. We didn’t have an answer for her.”

Troup’s Murphy was unstoppable on both the boards and scoring in the post.

Tiger head coach Carla Thornton was pleased with her team getting their second win of the season.

“The young girls had good teamwork and energy,” Thornton said.

“We were good with transition baskets. We have to work on defensive rebounding. We’ll work on that in practice.”

The first half was a defensive struggle for the Lady Rams, and they just couldn’t stop Murphy.

The Tigers got off to a quick 8-3 lead thanks to five points from Murphy.

Murphy finished the first quarter with 11 of Troup’s 16 points.

The Lady Rams continued to struggle in the second quarter as the Tigers continued to lean on their post game, and Troup’s size proved to be too much.

Murphy finished the first half with 18 points, and the Lady Rams went down in 35-22 at halftime.

The only big run by either team in the first half was Troup’s 6-0 run to end the half.

Valley’s Aniyah Robinson led the team in scoring with six at the half.

The Lady Rams continued to struggle in the second half as the Tigers took a 20 point lead in the third quarter and never looked back.

Murphy and Raygen Godfrey dominated the paint while Nasha Daniels assisted on the perimeter for Troup.

Valley’s Darcee Wright and Aniyah Robinson scored a combined eight in the fourth quarter to try and get the Rams back in the game, but Murphy and Godfrey kept the lead for the Tigers.

Robinson led the team in scoring with 14 points while making 50% of her shots.

Grimes knows there are more areas for improvement.

“We have to get better on defense,” Grimes said.

“We have to find some folks who want to get stops. The girls get to take tomorrow off, and we get to come back on Monday. We have to get better.”