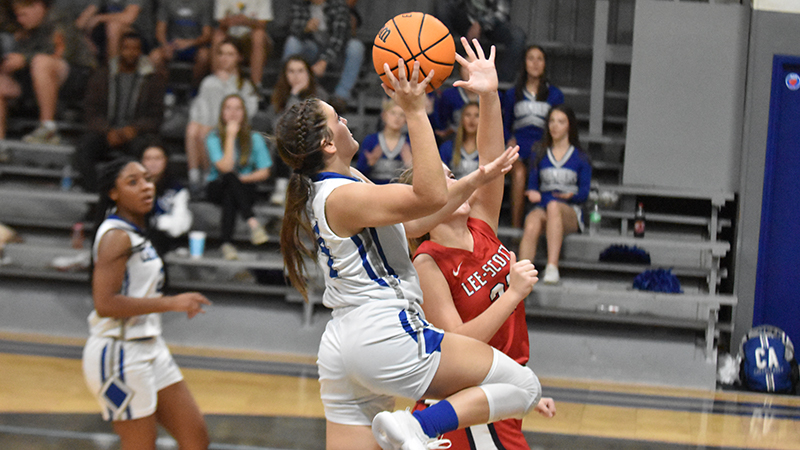 The Chambers Academy girls basketball team struggled defensively in their 52-29 loss at home to Lee-Scott on Tuesday.

The Lady Rebels struggled early on as they couldn’t stop the Warriors on the perimeter.

The Lady Rebels went down 10-4 early in the first quarter, and they just couldn’t seem to make the necessary shots to close the lead.

Chambers Academy head coach Jeff Hines knows that his girls have to be better at shooting if they want to win in the future.

“It was really sloppy,” Hines said. “We’re still growing up and learning. We have no seniors. It just is what it is. We have to get better every day.”

The second quarter started rough for the Lady Rebels as they went down 20-8, but a good defensive streak helped them eventually close the lead to 23-16 at halftime.

The scoring opened up for both teams in the third quarter, but the Warriors kept hitting three pointers to extend the lead.

Twenty points for Lee-Scott in the third quarter resulted in a 43-28 lead heading into the fourth quarter.

Unfortunately, the Lady Rebels just couldn’t pull back in the game, and Hines knows they have to get better at defending the perimeter.

“That’s a bad job on my part,” Hines said. “I didn’t have them prepared. We have to put our hands up.”

Hines also knows Lee-Scott is a difficult opponent, which led to some aggression during the game.

“At the end of the day, they’re going to play hard, and we’re going to shake hands,” Hines said. “They’re going to be physical and fundamentally sound, and we didn’t have an answer for them tonight.”

Hines wants his girls to work on everything before their next game.

“We have to work on taking care of the ball,” Hines said. “We missed a bunch of uncontested layups tonight. We just didn’t make plays. We have to understand the game.”