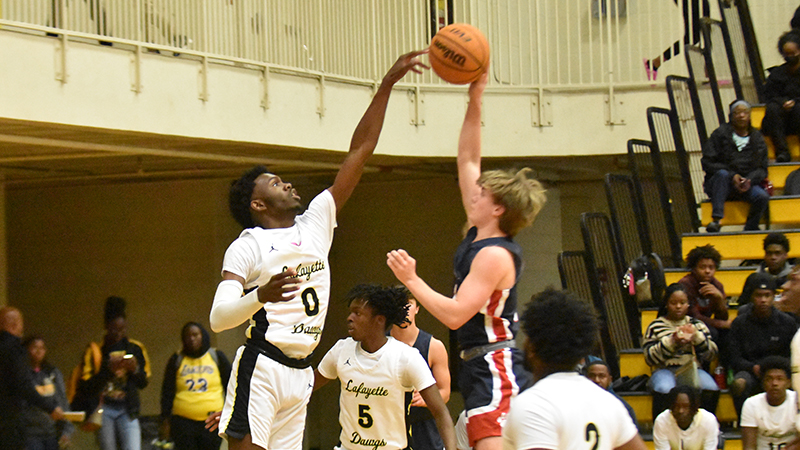 The LaFayette Bulldogs opened up basketball season with a physical 45-40 victory against Trinity Presbyterian at home on Tuesday.

The boys fought all the way with Trinity, and it was a fast paced defensive battle that gave both teams issues.

LaFayette head coach Chase Lewis was excited by his players fighting back.

“Every time we play Trinity, it’s always down to the wire. That was the largest margin of victory for either one of us in the five times we played.”

The game was fairly even for the majority of the first quarter, but the Bulldogs were able to pull away after playing a little faster on offense.

After being down 7-6, LaFayette’s speed extended their lead to 15-7 at the end of the first quarter.

Unfortunately for the Bulldogs, Trinity started to play more aggressive on defense, and they drew several offensive fouls to go on a run and put Trinity up 19-15 in the second quarter.

“I just told them to keep attacking,” Lewis said.

“They do a good job of setting screens. We took the baskets.”

The Bulldogs were able to get some baskets, but Trinity’s transition game was too strong.

The Bulldogs went into halftime down 23-17, and both teams had a combined 13 fouls in the first half alone.

LaFayette’s Jacquavious Williams was the leading scorer in the first half with seven points.

Things started out rough for the Bulldogs in the third quarter as they just couldn’t seem to hit any shots.

Trinity ended up taking a 33-24 lead, which was its largest lead of the game.

LaFayette was able to storm back at the end of the third quarter, and a buzzer beater shot from Key’lun Powell closed the lead to 33-29 heading into the fourth quarter.

“We picked up our intensity,” Lewis said.

“We had more traps. We forced some turnovers and got some fast break points.”

The Bulldogs tied the game at 35 apiece with 4:45 left in the game, and their full court press continued to suffocate Trinity’s offense.

A layup from LaFayette senior Martavin Dunn with less than a minute left ended any hope of Trinity coming back.

As the LaFayette students chanted “We want Valley” at the end of the game, Lewis knows they have to improve before the big rivalry.

“We need to work on pressure,” Lewis said.

“Valley is going to bring a lot of pressure. It’s a smaller gym. It’s going to be rocking.  I think we need to ignore the noise, and we’ll be fine.”

The Bulldogs will travel to Valley to play the Rams at 5 p.m. EST on Friday.