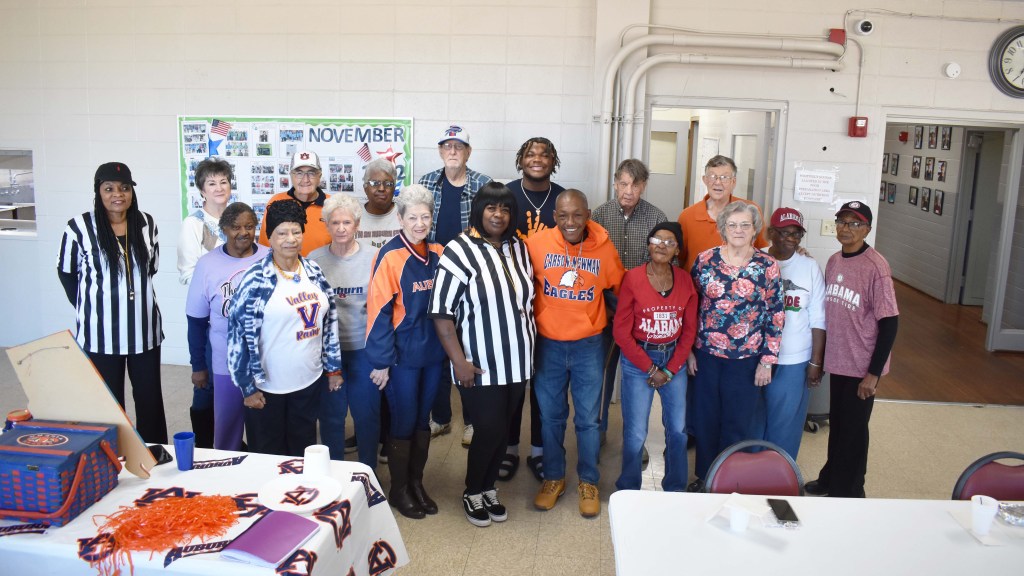 LANETT — This is Iron Bowl Week in the state of Alabama. On Monday, Lanett’s Senior Center participants got into the spirit of the week by wearing their favorite school colors. There were Roll Tide and War Eagle shirts, but some proclaimed loyalty to Alabama A&M, Lanett High and Valley High.

No doubt, the proudest guy in the room wore an orange and blue sweatshirt for the Carson-Newman Eagles.

Tracy Abner is the father of Travaunta “Trey” Abner, the former Lanett High Panther who is now playing tight end for Carson-Newman University in Jefferson City, Tennessee. Trey’s mom is Renae Abner, who works for the senior center.

Trey was the guest speaker prior to Monday’s congregate meal at the center. He brought with him something he’s mighty proud of — two state championship rings on having played for the Panthers in championship game wins in 2017 and 2019. He had a big game versus Mars Hill Bible in the 2019 state championship game played at Jordan-Hare Stadium in Auburn. He had 79 yards in pass receptions and had a TD catch. Game MVP Kristian “Ken Ken” Story finished with 249 yards passing and 110 yards rushing in Lanett’s 41-30 win.

Abner said Monday that it was very exciting to have been part of two state championship runs and credits head coach Clifford Story for keeping him focused on being the best he could be in athletics and the classroom.

Trey is from a big family with three brothers and three sisters. The family attends Ebenezer Baptist Church in Lanett. Trey was big for his age when growing up and has always been good at football, but basketball was his first love.

“I’d always played both sports, but in junior high, I was thinking about giving up football to concentrate on basketball,” Abner said. “Coach Story talked me out of it. He told me that with my size (6-3, 230), I would be a big part of the offense, either at tight end or fullback. I decided to stick with two sports.”

“Coach Story pushed me to be the best I could be in football, basketball and in the classroom, and I am glad he did,” Abner said. “He told me that if I kept up my grades, I could go on to play in college. His motivation has a big part in me playing college football.”

Abner played community college football in Kansas before moving on to Carson-Newman.

“I am grateful to be at Carson-Newman,” he said. “It’s a Christian school. Being there has helped me strengthen my character, to learn to speak before groups of people and to talk about my love for Christ. I am so glad to be there.”

He currently has a 2.5 grade point average on a 3-point scale and frequently makes the dean’s list.

“I didn’t make good grades when I was younger, but when Coach Story talked to me about how important it was to do well in the classroom, that’s what turned me around,” Abner said.

He was an honor student at Lanett High and was voted Mr. LHS by his classmates during his senior year.

“When I get the chance to speak to younger students, I tell them to be yourself, pursue your dreams and don’t be afraid to take risks if it can improve your life,” he said.

Recreation Director Trent McCants said that he is proud of Abner.

“He’s an excellent example of a really fine young man,” he said. “We love him around the City of Lanett. So many fine, upstanding young people are coming out of Lanett High and Springwood High. We are proud of what Springwood did this year, going all the way to the state championship game.”