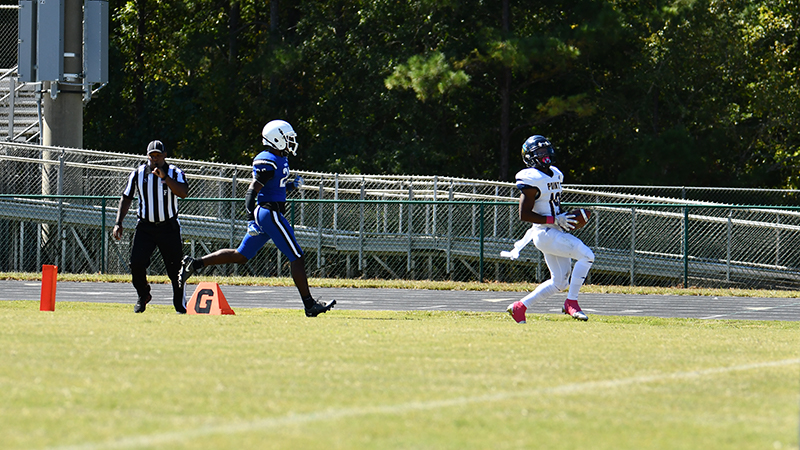 The Point football team is reaching the end of the season, and they’ll be looking for their fourth win of the season against a familiar foe in St. Andrews.

These two teams last played at the start of October, and the Skyhawks won 48-6 at home in their largest win of the season.

Point will now have to travel all the way to Laurinburg, North Carolina to face the Knights.

One area of concern for the Skyhawks has been the health of the team.

“We still have some injuries but the illness has worked its way through.”

Point is still limiting their practice time due to injuries.

They will also be without their top four running backs for the final game.

Zeiders feels like this game will be a little different from the one back in October.

“They have a couple guys coming back who were out for the last game. They have some athletes that are pretty good. I told my guys this isn’t the same team. We have to respect them. They have a win. It’s going to be their senior day, so our guys have to show up.”

One of the biggest question marks for the Skyhawks is the quarterback battle.

Junior quarterback Mitch Gossett has been starting for the majority of the second half of the season, but true freshman Austin Adcock has fought for the starting job.

“They’re both doing well. If they continue to learn the offense, then we can move forward from there. The more practice reps they get, the better they’ll be.”

The Skyhawks have also improved throughout the course of the season as their three wins have come in their last five games.

“We feel like we still have a lot to improve as a coaching staff. We still need to upgrade at certain positions, but we’re pleased with our growth. We know that we have to get better every day to compete on a national level.”

Zeiders has been working with offensive coordinator Greg Forest to help the younger players step up.

If Point does win, the Skyhawks have their best season since 2019 and their second most wins in program history.

“We will have won two  more games than the previous year. It will help with recruiting. It should also improve morale and keep everyone excited.”

The Skyhawks are working on exposing St. Andrews’  weaknesses this week.

“They have a really good running back and receiver, so we’re focused on stopping them,” Zeiders said.

“It’s kind of the Bill Belichick philosophy. Youhave to take away what they do best. If you don’t then it makes for really long days. We have to be able to run the ball some. We’re just trying to improve each and every day. I’m just excited to show our improvement and growth.”

The game will be played at Knights Football Field on Saturday at noon.