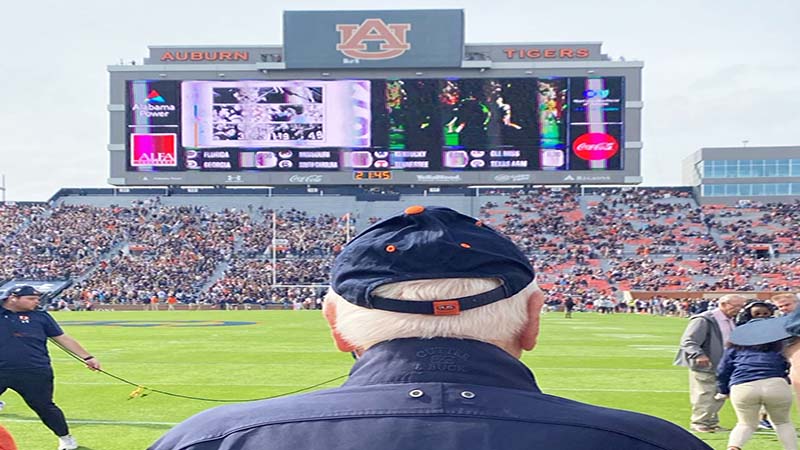 Decades before the Kick-6 was the most famous Iron Bowl, and arguably the most recognizable play in college football history, the Tide and Tigers played another game that everyone watching will never forget.

LaGrange resident Gary Sanders was the man calling it all, providing the color commentary on one of the wackiest games you’ll ever see.

The 1972 game, famously nicknamed “Punt Bama Punt” (or infamously, if you cheer for the Crimson Tide), was a one-sided affair early on. Paul “Bear” Bryant’s undefeated Crimson Tide led 16-0 and appeared to be in firm control.

An Auburn field goal brought the Tigers closer, but with time waning in the fourth quarter, things were looking bleak. That’s when magic struck — twice.

The Tigers blocked two Alabama punts in the final 10 minutes of the game, upsetting the Tide 17-16.

The Tigers would hang on to win, and Sanders’ call would go down in college football lore.

He was honored along with the taht 1972 team at last weekend’s Auburn-Arkansas game as the school recognized the 50th anniversary of that unforgettable “Punt Bama Punt” game.

“It was fun to go back,” Sanders said.

Sanders, 83, retired from broadcasting in 2006 after a career at Auburn and at UAB as a radio broadcaster. He’ll never forget Punt Bama Punt.

“That Auburn team was a special team in many ways because they weren’t supposed to be good,” Sanders said. “The national game that week was Oklahoma and Nebraska, so you were either at Legion Field, or you listened to that game on the radio. I came along at a time when the radio was more important than it was now. I’ve broadcasted 7,000 games, and Punt Bama Punt was the most successful. I even broadcasted the Duke-Kentucky basketball game where Grant Hill threw to Christian Laettner. Punt Bama Punt is number one for me.”

Being back on The Plains Saturday felt like old times.

“My greatest victory was I didn’t fall down the stadium steps. This one was special because my oldest granddaughter is a freshman at Auburn. My daughter and her husband were able to go down with me on the field. I saw some people I hadn’t seen in a long time.

Sanders even got a record made of his famous call of Punt Bama Punt.

“I moved down to Birmingham from Nashville, and I knew some of the record people there,” Sanders said. “We were able to put out a record, but nobody knows what a record is anymore. We had so many requests for tapes. It’s been a wonderful life. I wouldn’t trade with a lot of people.”

Sanders is retired, but his love for Auburn still runs deep. Like a lot of Tiger fans, he has some thoughts on the state of the program. Coach Bryan Harsin was fired this week.

“I ran a lottery in my own mind if coach [Bryan] Harsin would still be there. He made it to the Arkansas game but not past that. I don’t know where they’ll go from here, but that’s not my problem.”

Sanders said he only met Harsin once and said he was a really nice guy.

“It’s kind of common sense that a guy who was successful at Boise State wouldn’t transfer to Auburn. They were different worlds. I came when coach [Shug] Jordan was still there. The first thing he did was plant pecan trees because they take ten years to make any fruit. He showed he was there to stay. I don’t really feel sorry for Harsin. He walked away with $15 million. Auburn should be successful, but they’re always going to be in the same state as those people from Tuscaloosa. It’s too easy to forget that fan is short for fanatic but being a coach is like being a president.”

During his conversation with The Valley Times-News, Sanders also reflected on his first Auburn game. The Tigers lost to SMU, but the broadcast was a hit.

“I did a morning radio show with coach Jordan, and he told me, ‘They may not have liked the coaching, but they liked the broadcast,’” Sanders said. “He was such an outstanding representative. I always wanted to be a broadcaster. I had to cover a lot of garbage to be a broadcaster, but I’m happy for how things worked out. My voice is the only thing that hasn’t gone downhill.”

Sanders, 83, retired from broadcasting in 2006 and now resides at the Vernon Woods retirement community in LaGrange. Sanders lived in Birmingham for 53 years, and he moved to LaGrange to be closer to his daughter.

“My daughter lives here, and my son lives in Iowa,” Sanders said.

“It’s too cold in Iowa, and my daughter’s kids aren’t fully grown. I found Vernon Woods, and I can’t think of a better place to be.”