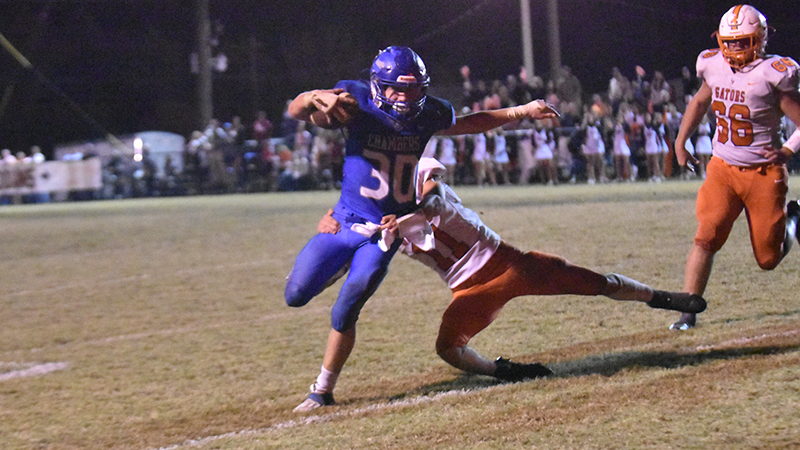 The Chambers Academy Rebels were seeking a spot in the state championship game, but some early struggles led to Clarke Prep winning 24-21 to end the Rebels’ season.

The first half was a complete struggle for the Rebels as they struggled to run the ball on the goal line and defend the Gator passing attack.

“I have to do a better job of figuring out how to score. We haven’t had that problem this year. We got in the red zone, and for whatever reason we couldn’t punch it in. We couldn’t do what we needed to do to sc0re, and that’s on me as a coach. We’ll fix it and get better, but our guys fought to the end.”

“I don’t know if it was just a lack of discipline, and it’s tough,” Allen said.

“It’s tough to overcome 15 yard penalties when you have the ball. It’s tough to call plays. I thought we did better in the second half, but we still had one or two.”

The Rebels’ first drive resulted in a punt, but they returned the favor as Buster Coker had a huge tackle for loss on third down to stifle the Gators’ opening drive.

After starting on their own 23 yard line, Rebel running back Braxton Yerta found a hole and took it 70 yards to the goal line.

Luke Tarver ran it in two plays later to give the Rebels a 7-0 lead with two minutes left in the first quarter.

Clarke Prep responded as Max Anderson took the ensuing kickoff all the way to the end zone to tie the game 7-7.

The Rebels drove the ball 50 yards on their next drive, but they couldn’t get the blocks necessary to score, and they turned it over on downs.

The Gators started on their own three yard line, but their passing attack drove them 97 yards all the way to the end zone to give Clarke Prep a 14-7 lead with 9:10 left in the second quarter.

The Rebels were forced to punt on the next drive, and things were looking grim for Chambers Academy.

A big punt return started the Gator drive on the opposing 25 yard line, and they were able to punch it in to make it 21-7 with 6:16 left in the first half.

The Rebels were able close the lead as a 70 yard drive saw Tarver score his second touchdown of the night to make it 21-14 with three minutes left in the first half.

The Gators were able to drive down the field and set up for a field goal, and Clarke Prep was able to hit a 35 yard field goal as time expired to extend the lead to 24-14 at halftime.

The Rebel defense rallied in the second half, and the whole team cut down on penalties.

Unfortunately for the Rebels, the offense couldn’t make the conversions necessary to give Chambers Academy the lead.

The Gators got the ball to start the second half, and the Rebels had their chance to gain momentum until a Luke Tarver interception was called back due to a roughing the passer call.

Luckily, the Rebels got a sack to force a turnover on downs.

The Rebels got the ball in opposing territory, but they turned it over on downs.

After a Gator punt, the Rebels were forced to start the drive on their own two yard line.

After big run by Tarver to end the third quarter, the Rebels were stopped in the red zone.

Chambers Academy’s Noah Hand attempted a 32 yard field goal, but a high snap caused the kick to be wide left.

The Rebels then turned it over on downs again.

Clarke Prep tried to run the clock down, but the Rebels forced another three-and-out.

This time, Chambers Academy drove the ball 68 yards and gave Tarver the hat trick with his third rushing touchdown to make it 24-21 with just under six minutes left in the game.

Clarke Prep was stuck on third down, and a kicked ball after a botched snap led to the Rebels recovering with only three minutes left to play.

Chambers started on the 50 yard line, but they still struggled to move the ball.

On fourth and three, the Rebels ran the ball, and a questionable spot led to a turnover on downs to end the game.

“I thought we had a first down,” Allen said.

“I don’t know what happened, but it looked like it was past the chain. It is what it is, and we shouldn’t have let it come down to that.”

Allen had a message for his seniors.

“I’m proud of them and the legacy they left,” Allen said.

“They battled for me. They turned our season around. They’re still champions in my book. They played for a couple state championships, and they won one in their career. How many guys can get to say that? I just appreciate them and love them.”

Allen also knows his returners have to get back to work.

“We have to work hard,” Allen said.

“That’s now two years we’ve come up a little bit short after playing for six state championships in a row. We have to wait and see what we need to do in the offseason to see how we need to improve.”

Allen also thought they should have passed a little bit more.

“We probably needed to pass more, but they weren’t stopping us a lot,” Allen said.

“We were moving the football up and down the field. We just had a penalty here and there. It just is what it is. We try to do the things we’re best at and we’re a running team. We have to work on that in the offseason.”

Allen appreciated the crowd for their support.

“It was a great crowd, and we had great support,” Allen said.

“Congratulations to Clarke Prep and coach Carlisle. He’s been on the other end of this with me several times, so congratulations to their kids. They played really hard, and they wanted to win the football game just like we did.”

Chambers Academy finished their season with an 8-4 record and a region title.