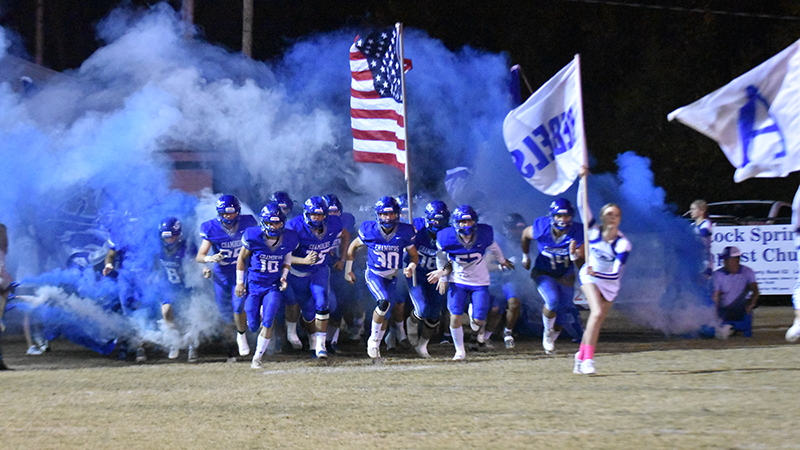 The Chambers Academy Rebels are coming off of a convincing 56-12 victory over Escambia, but they have their eyes set on Montgomery as they’ll be facing Clarke Prep in the AISA semifinals.

While this will be the first time Chambers Academy will play Clarke Prep, Rebels head coach Jason Allen is familiar with who they are.

“We played them when they were called Grove Hill Academy in 1998,” Allen said.

“That was my first year as a head coach. They beat us in the first round of the playoffs. I know their head coach really well. I’ve coached against him more than anybody since 2013. He was the head coach of Abbeville, who was in our region. We’ve played against him eight times, so we’re very familiar.”

Both Chambers Academy and Clarke Prep are sitting at 8-3 on the season, and Allen knows it will be a close game.

“We have a chance to go to the championship, so we understand it’s supposed to be hard,” Allen said.

“Our guys are prepared to play a four quarter game. We want to eliminate our mistakes, whether that be turnovers or penalties. We feel like that gives us the best chance to win. We’re ready for what’s going to be a physical game.”

Allen is going to work on improving in every facet of the game in practice this week.

“Everything fits within our system,” Allen said.

“We’re just working to make sure we execute everything we do. Sometimes we may run the buck sweep or the trap. You don’t know from week to week how the defenses are going to line up. They’re an inside zone team, so we’re going to have to stop the run. Our goal going into every game is to make sure the other team gets one dimensional. We need to make sure we’re sound in the pass game.”

Allen knows that all his players are healthy and ready to go.

“All our kids are ready to go that haven’t been lost for the season,” Allen said.

“We have some bumps that happen during this time of the year, but we aren’t worried about that.”

Allen feels like his players having previous experience with playoff runs will give them an advantage in this game.

“I don’t think they’ll get nervous because they’re used to being there,” Allen said.

Allen feels like knowing Clarke Prep’s coach, Ashley Carlisle, will be both an advantage and disadvantage.

“We’re really prepared for what he does, but he’s really prepared for what we do. At the end of the day, the kids have to play the game. It always comes down to who blocks and tackles the best. We will have seen everything someone can do to us defensively. We look back at when we played him before, and I’m sure he does the same thing. Maybe you can find something that gives someone an edge.”

The Rebels will lean on their run game, which has been the cornerstone of their offense, to lead them to the state title.

The Rebels had six rushing touchdowns split among four running backs last week, and that was without one of their star rushers, Luke Tarver.

“We’ll use whatever we need to do to win a football game,” Allen said.

“Clarke Prep is big up front. We’re kind of worried about their size. They have a really good receiver that we’ll have to keep in check.”

The Rebels were able to put in their younger players in the second half of the Escambia game, and Allen feels like that could be a good thing.

“It can help with health, but your kids don’t get conditioned to play four quarters,” Allen said.

“You may experience a little more fatigue. I think there will be some points scored this game. It won’t be a defensive stalemate, but it won’t be a shootout either.”

Although the two teams have equal records, Allen isn’t sure if it’s going to be their most equal opponent of the season.

“They’re similar to us. There’s some things we do similar to them. I don’ think our styles are similar. We only had three common opponents this year. We played some really good teams this year like Lee-Scott and Glenwood. I think that helped us. Our kids got to see some really good football teams, and it made us tougher. We learned how to earn things.”

The Rebels will also be hungry considering they were upset at home last year in the semifinals.

“They want to play for a state championship,” Allen said.

“They were disappointed that we didn’t get to play in it last year.”

The game will be played at Torbert-Allen Field on Friday at 8 p.m. EST.