Second half surge charges Rams past Troup in 65-50 win 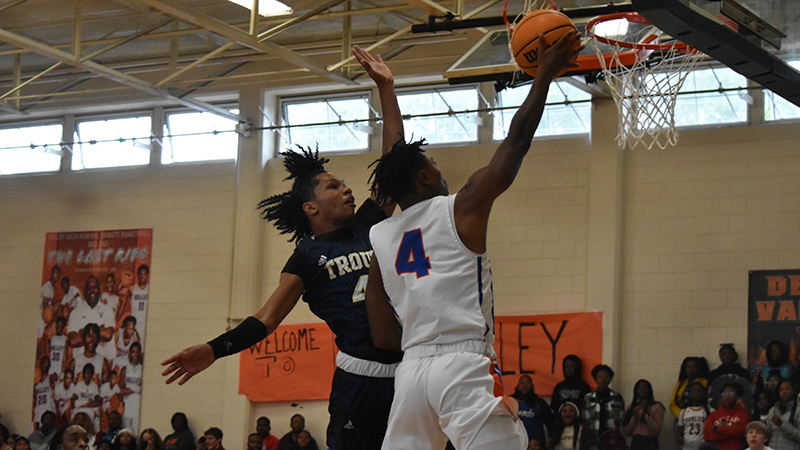 The Valley Rams fired on all cylinders in their dominant 65-50 victory over Troup on Saturday.

Valley head coach Marshon Harper is happy with his team’s performance, especially since they played two games in under 24 hours.

“I just told them we needed to dig in for one more game,” Harper said.

“I’m proud of these guys, and we played another rival with Troup. These guys know most of the guys at Troup, so they wanted to get a win.”

The first half was all Valley, but Troup did get off to a quick start thanks to three baskets from Deo’vion Tucker.

The Tigers took an early 10-2 lead, but the Rams bounced back thanks to solid defense and paint play from Cam Dooley.

Tucker scored 11 of his 21 points in the first quarter, and the Rams were able to slow him down in the second quarter.

Dooley also had 11 points in the first quarter, but his defensive presence was the key difference between him and Tucker.

Valley’s defense continued to be a barrier for the Tigers as Valley only allowed 15 points in the middle quarters.

The Rams went on a massive 15-0 run in the second half to put the Tigers away.

The run started with an Ian Crim-Davis basket, and a Jayden Thomas three-pointer got the crowd on its feet and put the Tigers to rest.

The rest of the fourth quarter was an exchange of free throws, and the Tigers couldn’t recover despite scoring 17 points led by Jalen Brown’s five in the quarter.

Harper was pleased with his entire team, but he knows there’s still room for improvement.

“I was pleased with our intensity,” Harper said.

“We rebounded well and shot well. We came out with intensity. We were better with free throws. Cam made his presence known. He did a great job today. We have to fine tune our man defense, but I’m proud of them.”

Dooley finished with 22 points, and the Rams will take on Russell County on Monday.