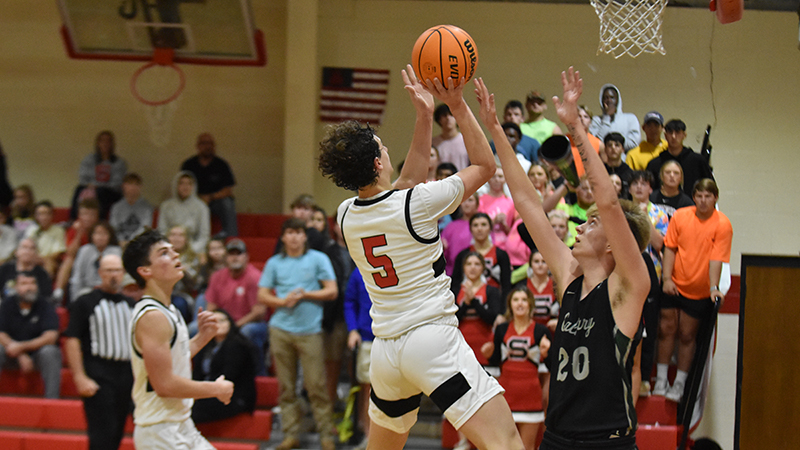 If you were at Springwood on Thursday night, you weren’t hearing the roar of thunder from Tropical Storm Nicole.

You were hearing the roar of the student section as the Wildcats rallied to win a 68-60 thriller over the Calvary Knights.

Calvary got off to an early 12-6 lead, but the Wildcats continued to drive in the pain and draw fouls.

Springwood eventually ended the first quarter with a 16-15 lead.

The Wildcats extended their lead to six by making it 32-26 toward the end of the second quarter.

Calvary took advantage of Springwood turnovers and hit a couple nice shots to head into halftime down 32-31.

It didn’t help that Springwood was without their four football players and Crawford Fuller, who sat out the second quarter with an injury.

Fuller did return in the third quarter to help the Wildcats in the paint.

Although the scoring was distributed evenly, Springwood’s Eli Westbrook led the first half scoring with eight points.

Things were starting to look rough for the Wildcats as Calvary hit three three-pointers in a row to give the Knights a 48-39 lead.

Springwood’s defense started to lock down as they made it a one point game heading into the fourth quarter down 48-47.

The Knights extended their lead to six in the early fourth quarter, but the Wildcats were able to draw fouls and take advantage of free throws.

Springwood head coach Lisa Sampson was impressed by her team’s ability to rally and pull off the upset.

“This was a big game for them,” Sampson said.

“They really stayed focused and executed what we asked them to do. We changed up some things offensively and defensively based on what we had. I thought they did a great job. They were running a 1-3-1 set, so we went into an overload, and the guys just ran the ball inside and it worked. I’m excited for them.”

Sampson believes their undefeated start to the season along with the big win will only help them through the rest of the season.

Sampson also thanked the crowd for cheering on her boys.

“Our crowd is amazing,” Sampson said.

“Some of these seniors just take it to another level, and we appreciate them.”

Sampson was pleased with how tough her team was.

“I was proud of their resilience,” Sampson said.

“Crawford got hurt, and he toughed it out in the second half. I’m super proud of him. These guys played pretty much the whole game.”

Eli Westbrook finished as the team’s leading scorer with 16 points.

The Wildcats will travel to Georgia on Tuesday to face LaFayette Christian and try to hold on to their undefeated season.