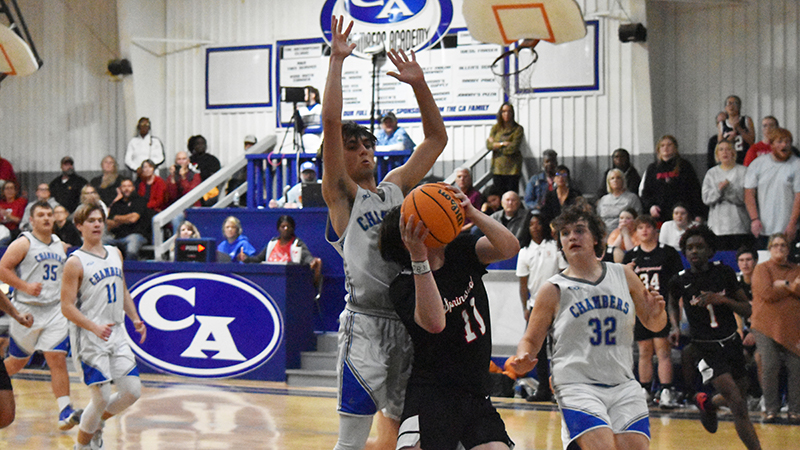 The Rebels and Wildcats didn’t get to meet on the gridiron this year, but all the energy from the rivalry found its way onto the hardwood.

The Chambers Academy boys basketball team played their second game in 24 hours, but that didn’t slow them down as Rebels Caden Hayley and Levi Waldrop led them to a huge 64-62 win over the Wildcats despite Springwood overcoming a 21 point deficit.

Springwood head coach Lisa Sampson is proud of her boys despite the loss.

“We just can’t start off that cold,” Sampson said. “We couldn’t have been colder. This is a rivalry game. There’s a lot of adrenaline. They showed a lot of fight and discipline. I couldn’t be more proud.”

The first half was a three point clinic for the Rebels as Springwood struggled to defend the perimeter.

The Rebels got off to a fast 11-3 run thanks to three combined three pointers from Grey Hayley, Brayden Riley and Levi Waldrop, and the Wildcats couldn’t catch up.

The Rebels took an 18-9 lead heading into the second quarter, and their shooting from the perimeter didn’t slow down.

Things didn’t get better for the Wildcats as the Rebels continued to knock down shots, and Springwood struggled to hang on to the ball.

Springwood’s offense did improve in the second quarter as they put up 11 points, but they were still down 35-21 at halftime.

Chambers Academy head coach Jason Allen knows that their hot start was the key to winning.

“We had great effort on defense, and we hit some shots,” Allen said.

“I’m always a better coach when we hit shots. I thought we played well the first half.”

Springwood came to life in the third quarter as they switched to a full court press defense that gave the Rebels issues.

After being down 42-21 early on in the third quarter, the Wildcats bounced back with some three pointers of their own to cut the lead to 46-44 heading into the fourth.

Allen knows that’s something they need to work on.

“It’s kind of what happened to us the night before,” Allen said. “Our defense went away a little, especially in the third quarter. That Eli Westbrook is really good. It was a battle between him and Caden Hayley.”

The fourth quarter was a back-and-forth battle as the Wildcats took a 50-49 lead with only six and  half minutes left in the game.

Rebel Levi Waldrop was able to create some space with a three to make it 55-51, but Eli Westbrook hit his own three to give the Wildcats a 57-55 lead with only three minutes left. With 17 seconds left, the game was tied up at 62.

Caden Hayley hit an easy layup to give the Rebels the lead, and Jacob Norgard blocked a last second shot by the Wildcats to secure the victory for Chambers Academy.

Sampson knows that they needed to be better at defending the perimeter.

“They were at home, and they had some kids besides Caden Hayley step up,” Sampson said. “They’re a nice team. Our kids are disappointed, but I think we can take some positives.”

Hayley was the leading scorer for both teams with 32 points.