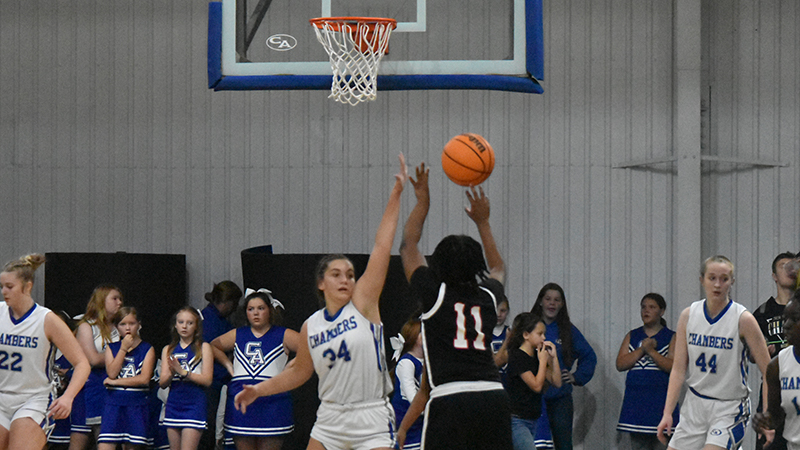 The Springwood girls basketball team continued to lean on Tori Patillo and EJ Matthews as they combined for 51 points in the Wildcats’ 66-40 win over Chambers Academy.

Springwood head coach Lisa Sampson is proud of how her leaders stepped up.

“It was the Tori and EJ show,” Sampson said.

“I’m so happy for them. They’re young, but they’ve stepped into the leadership role and are playing great ball. They make everyone around them better, so that’s fun to watch.”

The first half was all Wildcats as the Lady Rebels couldn’t take advantage of opportunities at the free throw line, and Springwood took a quick 6-0 lead.

The Lady Rebels didn’t score a single field goal in the first quarter, and the Wildcats took an easy 17-1 lead at the end of the quarter.

Chambers Academy head coach Jeff Hines knows the first quarter was a killer for his team.

“We had no intensity or effort,” Hines said.

“I don’t know if it was coming off of last night. We just weren’t into the ball game, and I have to get them ready to play. We outscored them 31-26 in the second half, but this game is two halves.”

Chambers Academy’s Mackenzie Gilliland took control of the second quarter for the Lady Rebels, and they opened the quarter with three unanswered points.

Although the Lady Rebels scored 12 second quarter points, the Wildcats took a 33-13 lead at halftime.

Matthews had 16 points at the half while Gilliland had eight.

Things started to get a little better in the second half for the Lady Rebels as their defense only held the Wildcats to four third quarter points.

The Lady Rebels were still down 37-25 heading into the fourth quarter.

Chambers Academy started implementing a full court press to try and swing the momentum in their favor, and they were able to cut the lead to eight.

Gilliland fouled out with two minutes left in the game, and the Wildcats were able to hang on with 23 fourth quarter points.

EJ Matthews was the leading scorer for the Wildcats with 33 points while Gilliland finished with 22 points.

Sampson is happy with how her leaders stayed out of foul trouble.

“They’re always in foul trouble because they’re everywhere, and they play a lot of minutes for us,” Sampson said.

“We’ll work on them. They have to play a little more disciplined, but they’re super kids. We’ll learn to spread the ball around a little bit.”

“We just played four games in a row, so we need to work on conditioning,” Sampson said.

Hines knows that his team needs to open games better if they’re going to win.

“We had one point in the first quarter,” Hines said.

“Mackenzie going out late hurt us, but it is what it is. She has to be smart.”

Although Gilliland was the leading force for the Lady Rebels, Hines wants some of the other girls to step up.

“When your number is called, you have to bring something to the table,” Hines said.

“Free throws and layups hurt us tonight. We struggled. We have to get back in the gym and shoot free throws and contested layups.”

Hines was pleased with his girls’ defensive efforts.

“I thought we defended well in the second half,” Hines said.

“I thought our energy was great. I thought our execution was a lot better. I should’ve gone to the press earlier, but hindsight is 50/50 as Pat Dye used to say.”

The Lady Rebels missed 17 of their 29 free throws, which means they were only 41.3% from the line.