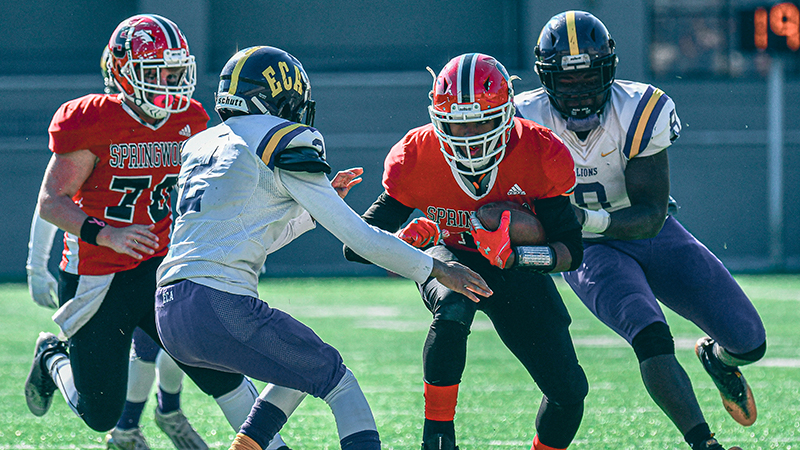 MONTGOMERY — The Springwood Wildcats fell to Evangel 38-28 Thursday at Cramton Bowl in a four quarter battle in the AISA 8-man state championship.

A couple of key mistakes by the Wildcats in the second half led to the Lions running away with the win.

Springwood head coach Joey Burch was proud of how his players fought.

“I’m just extremely proud of where we started, especially with these seniors we have,” Burch said.

“These guys have had five football coaches in three years. It’s just very tough. We almost didn’t even have a team. I didn’t know the community. This is my second year. I told the headmaster that I couldn’t even promise that we would have a team. We knew we would play Evangel again, and we knew it would be tough in the cold. It was a heck of a game. I hope that people who say 8-man football isn’t real football watch that game today.”

The first half was a surprising defensive battle, as both teams struggled to move the ball.

The Wildcats took advantage of a botched punt, and Johnathan Johnson was able to open up the scoring for Springwood with a seven yard touchdown run.

Cayden Cook converted on the two point try, and Springwood took an 8-0 lead with seven minutes left in the first quarter.

Both teams struggled to move the ball, but the Lions were able to score after a 40 yard wheel route reception by Jordan Sharp to make it 8-8 with eight minutes left in the first half.

Toward the end of the half, Evangel had the ball in its own territory, but Springwood’s Francesco Lim came up with a huge interception to give the Wildcats the ball back with about 30 seconds left in the half.

Penalties became an issue for Springwood, and they were forced to attempt a 34 yard field goal.

The Wildcats missed, and the teams went into the half tied at 8.

The flood gates opened for both teams in the second half, but it felt like the Wildcats — even when ahead — couldn’t take control.

Springwood’s Ben Cooper threw a pick-six, and the Lions were able to take a 16-8 lead only two minutes into the third quarter.

The Wildcats responded with a 90 yard kickoff return by Johnathan Johnson, and the Wildcats scored on the next play thanks to a Cayden Cook three yard touchdown run to tie it up at 16.

Springwood struggled to move the ball on the next drive, and a high snap on the punt forced the Wildcats to turn it over on downs inside their own 25 yard line.

Evangel took advantage of the field position with a Daryl Mack touchdown run to make it a 22-16 Lions lead after a failed two-point try.

After another good kickoff return, the Wildcats were able to capitalize with another Cook touchdown, this time from 25 yards out.

Springwood failed the two-point try, and the Wildcats tied the game up at 22 with three minutes left in the third quarter.

Special teams was a blessing and a curse for both teams, but the Wildcats blocked Evangel’s punt to get the ball back at the Lions 38 yard line.

The Wildcats struggled to move the ball again, and the Lions got the ball back at the start of the fourth quarter.

Springwood blocked another Evangel punt, and they took over at the Evangel 27 yard line with nine minutes left in the game.

Cook scored his third touchdown of the day on a 10 yard run, but the Wildcats failed to convert on the two-point try.

Springwood had a 28-22 lead until Evangel’s Joshua McCoy took the ensuing kickoff all the way to the end zone.

The Lions converted on the two-point try to give the Lions a 30-28 lead with seven minutes left.

Things didn’t get any better for the Wildcats as they fumbled on the kickoff return to give the Lions the ball in Springwood territory.

The Wildcats forced a key turnover on downs with four minutes left, but Springwood still struggled to move the ball.

The Wildcats tried a Cayden Cook pass on fourth and medium, but Evangel picked it off again and ran it back to the end zone to give the Lions a 38-28 lead with only two minutes and 44 seconds left.

The Wildcats had a nice pass from Ben Cooper to Johnathan Johnson to set them up in the red zone, but they turned it over on downs to end the game.

Although Springwood didn’t win, Burch and his players know how big playing in the title game was for the program.

The Wildcats outgained Evangel 226 yards to 124, but it was just a few key plays that cost Springwood.

“This was a great team atmosphere,” Burch said.

“We loved each other even when things got tough. What we did here at Springwood is what it’s all about. They learned some life lessons. This was a tough one to swallow, but they never quit. We had some grit. We became a really physical team, and that didn’t happen in the past. I took over the job to give these guys a great experience that they can talk about. I can’t say enough about our community. They packed the house. We couldn’t win today, but we gave it our best shot.”

Two of Springwood’s seniors, Cayden Cook and Tresin Garrett, are proud of how far they made it.

“It means a lot,” Garrett said. “This guy here [Burch] is trying to say he did it for us. He didn’t even know he was going to be the coach this year. In my time at Springwood, we haven’t had a coach that was just on us. He pushes us to be the best we can.”

“With this guy and our players, I knew we had something special coming. This team has more heart than any team you can name. We haven’t been out of a game all year. I’m glad to make it far, but you always want to make it further. The team we have can beat any team on our schedule when we’re on our game. Evangel was in the state championship last year. We weren’t. We were 1-9 sitting at home.”

Burch was happy to have the fans drive all the way to Montgomery to see the Wildcats.

“As much as we love them, sometimes they were a hindrance,” Burch joked.

“We jumped offsides and couldn’t get plays in because they were just so excited. They don’t know when to be quiet. Maybe the game was too big on us. That’s on me. We threw two picks. We can’t dwell on it.”

Burch wants his players who are returning to learn from the experience and work to get back to the state title game.

Springwood finished the season with a 7-5 record, and they reached the state title game for the first time since 2010.