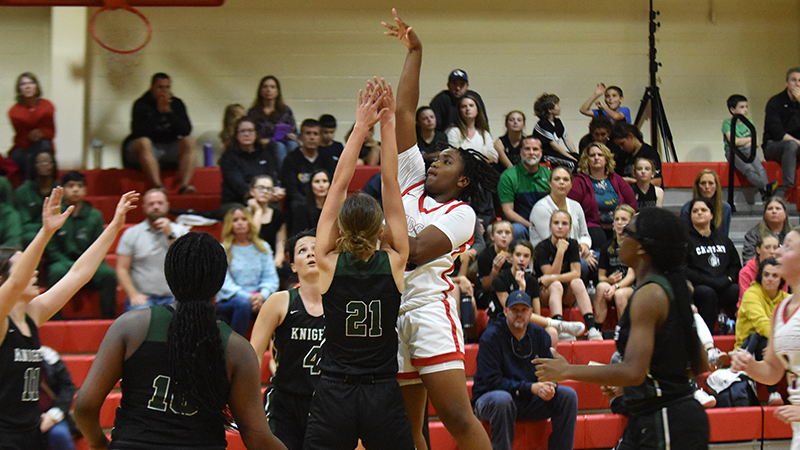 The Springwood varsity girls basketball team struggled offensively as it lost to Calvary Christian 55-41 at home on Thursday.

The Knights played a zone press defense that made it difficult for Springwood to take shots from the perimeter.

The Wildcats tried to pass it in the paint, but they didn’t have the height to match up with Calvary.

The first quarter went well for the Wildcats who ended up leading 18-9 at one point.

It didn’t take long for Calvary’s zone defense to create issues as the Knights went on a massive 18-0 run to make it 27-18 Calvary in the second quarter.

Springwood started to attack their defense more, but the Knights were able to take a 31-23 lead heading into halftime.

Springwood’s EJ Matthews led the Wildcats in first half scoring with 14 points.

The Wildcats were able to shorten the lead to six points in the third quarter, but the Knights kept scoring to keep the lead alive.

At the start of the fourth quarter, Springwood made it 44-39 to close the lead to five.

From then on, the Wildcats couldn’t make any stops defensively, and Calvary was able to run away with the win.

Springwood freshman Tori Patillo finished as the leading scorer for the Wildcats with 19 points.

Matthews was the second leading scorer with 16 points.

Although it was the first game of the season, Springwood head coach Lisa Sampson knows there’s a lot of work to be done.

“It was the girls’ first game, and I could tell they were a little nervous,” Samspon said.

“We have two really talented players in EJ Matthews and Tori Patillo. They’re going to continue to be leaders and grow this team to be better. I’m not worried about it. We’ll be ready for the next one.”

Sampson was pleased with Matthew’s performance.

“I was really pleased with EJ’s ability,” Sampson said.

“She came right out of the gate shooting threes and just taking it upon herself. That’s what we really need from her. It’s the same thing with Tori. They have to understand the offense is run through them for us to be successful.”

Sampson wants her girls to be stronger on the boards.

“We’re not a tall team, so we have to rebound as a team, and we didn’t do that tonight. It’s also a testament to Calvary. They’re a talented ball club. We’ll get better.”

Sampson wants her girls to stay positive despite starting the season with a loss.

“I told them to keep their heads up in the locker room,” Sampson said.

“We don’t do a lot of yelling as coaches. We just told them to learn from it. That’s the biggest thing you can do. You just have to come to practice ready to work.”

The Springwood girls will look to rebound on Tuesday at LaFayette Christian.