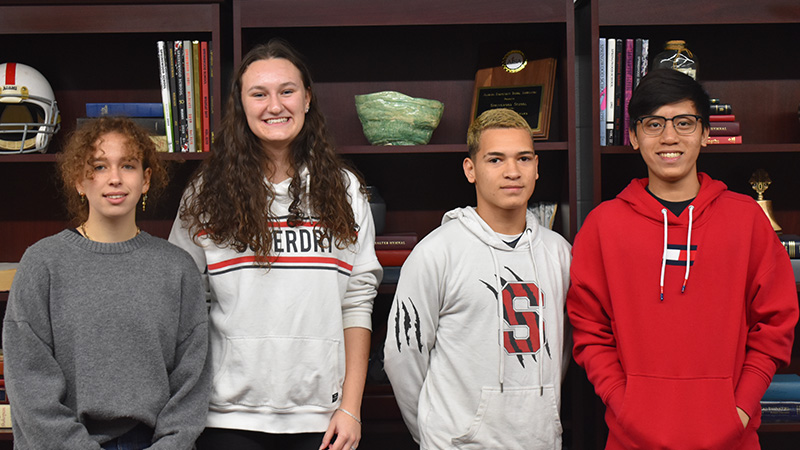 Teixeira arrived at Springwood in January. Teixeira, from Brazil, wants to play soccer at a college in America, so he began researching high school exchange programs.

“I want to go to college here, and I want to play soccer in college, so I was looking for a high school with good academics and a good soccer program. I found Springwood for these,” Teixeira said. “So, we figured it out, and now I’m here.”

Vu, from Vietnam, has been at Springwood for three months as well. He said he did research to prepare for his stay in America and that he has been welcomed by his American classmates.

“There’s no culture shock for me because after I got the visa, I did some research,” Ken Vu said. “There’s one thing they say that I don’t see to be true. They say that students here may have hatred toward us as Asians or Africans. But I don’t see that. We feel that they are family and friends.”

Fremont-Cazala is from France. For her, it wasn’t much of an adjustment to travel on her own. Her true shock came when she entered the classroom.

“The culture shock I experienced was here at school,” Fremont-Cazala said. “In comparison, in France, we don’t have relationships with our teachers. In France, it’s more like you need to listen to them, and here, it’s more like we work together.”

The classroom structure was very different for Becker and Vu as well. They added that their lessons in Vietnam and Germany had less hands-on activities. Vu said there were no group projects in his old class.

“I think the fact that I’m here is a blessing because this a dream for many people,” Vu said. “If I were there now, every day, it would be so much homework and pressure. We did not have any activities like sports.”

The students agreed that a huge challenge was having to be away from their families. Teixeira said that international students have to be an adult in some ways but that it’s ultimately worth it.

“You feel a little bit different because it’s just a big thing that you’re doing on your own,” Becker said. “But after a couple of times, it’s great. The community here and the people, they’re open-minded.”

Fremont-Cazala said she likes that Springwood is so accommodating. She’s glad she can decide for herself which American customs she feels comfortable participating in.

“Something I really appreciate here is that they don’t force us to do the Pledge of Allegiance,” Fremont-Cazala.

“I have a friend who’s in the U.S., and his school forces him to do the Pledge of Allegiance and all those things like he is an American, and here, we don’t have to do it.”

Teixeira also said his classmates are teaching him about more than just American culture. While he is working on his English, two of his roommates are also teaching him Spanish. He is learning about the Congo from another.

“It’s kind of crazy because I came here to speak English, and I’m learning Spanish and English at the same time,” Teixeira said.

“You start to know about other countries. You start to think, oh, my life is not just about Brazil and the United States.”

Springwood staff provides help with college and scholarship applications and other resources.

Becker said she feels more prepared for the future thanks to Springwood’s academics. As a sophomore, the PSAT helped her learn with what to expect next year with the SAT.

“They give you a lot of opportunities, and they really prepare you for your life after school. I did the PSAT test,” Becker said. “And I think it’s just good to know what you have to do. Because as international students, you don’t really know what the SAT is. It was good for me to see how our test is going to be.”

“Through the years, we have had 29 acceptances to the top 100 schools,” Hixon said. “Particularly with our international students, we have students all over the place right now.”