Tammy Robinson named Teacher of the Year at Fairfax Elementary 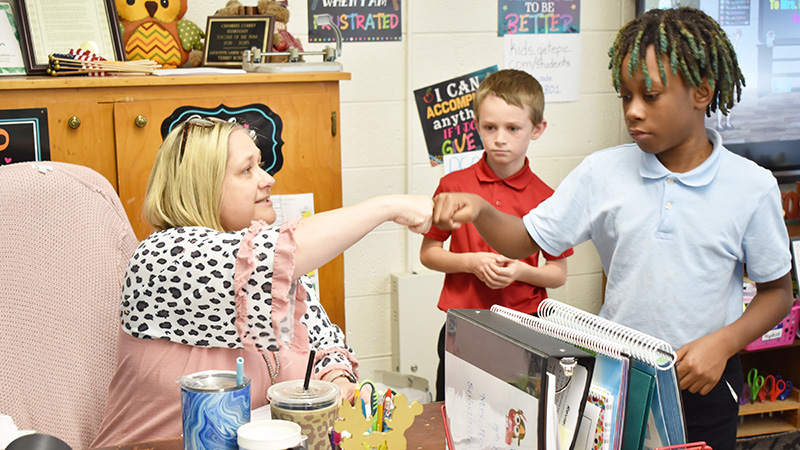 Fairfax Elementary Fourth Grade Math Teacher Tammy Robinson has always wanted to be a teacher. Ever since her third-grade teacher, Ms. Sawyer, gave her some teacher-edition textbooks that she planned to throw out.

“Miss Sawyer was getting rid of some old teacher editions,” Robinson said. “My best friend and I took those back home and we played teacher with our little stuffed animals and Barbies.”

Now, after 25 years of teaching, Robinson has distinguished herself with her interactive math games and her extensive data collection for differentiated instruction. In her first year at Fairfax Elementary school, Robinson has been made 2022 Teacher of the Year by the recommendation of her peers and student parents.

“That’s been the most common thing,” Robinson said. “That the children did not have a love for math until this year, that they’re developing more of an understanding and appreciation for it.”

Robinson studied at Troy University. In 1998, after graduating, Robinson was hired as a third grade teacher. Over the past 25 years, Robinson has taught first through fifth grade. Though she has taught multiple subjects, Robinson shines in her math lessons. She attributed her success to her own experience of struggling with the subject in elementary school.

“I really was not the best student in math in elementary school,” Robinson said. “It wasn’t until college that algebra clicked with me because of one professor, and then it just carried on. Because I knew that I struggled as an elementary student, I could put empathize with them and put myself in their position. That’s where it came from.”

The drive that Robinson said that she feels comes from desiring to foster an appreciation for math and a foundation on which her students can build.

“If they don’t have a firm foundation in place value, or multiplication, they’re gonna be lost,” Robinson said. “It’s the multiplication that leads to the algebraic thinking that will carry them into algebra and higher maths.”

Robinson has been doing weekly room transformations for six years. Every Friday, after Robinson gives her lesson, she transforms her room with a new theme-related activities and games. Last week, Pokemon characters decorated her walls. The room transformations engage students in that week’s mathematics lessons through the games.

“It’s not all about the work and drill and practice. They are kids that need a break. They need to move around,” Robinson said. “They take that and run with it. Then, they’re using math in a fun way instead of just book work. So that makes it fun for them, and they’ll come into math class like, ‘Yes, my favorite subject.’ That just makes my day to hear that.”

Another thing that caught the attention of Robinson’s principal was her analytical approach to differentiated instruction.

Robinson analyzes data of her students’ scores for specific learning outcomes to better develop her differentiated instruction. By differentiating between students at varying scoring levels, Robinson can spend more time with those students who might need more focused instruction.

“That’s something that I came up with on my own over time from seeing that when I first started teaching, we didn’t have the technology or the administrative support to do those things that we need to do to get the kids where they need to be,” Robinson said.

However, as hard as she works to keep every student caught up, Robinson said that she feels what’s most important is making sure that each student feels loved and knows their worth.

Being awarded means more this year, Robinson said, because of the overwhelming support that she received from parents and former students. Letters of recommendation were overflowing for Robinson, and she was overwhelmed by the support.

“I think that that has been one of my favorite accomplishments,” Robinson said. “Kids in the past will come back to me and say, ‘Not only did you help me learn this, but you helped me feel this.’”