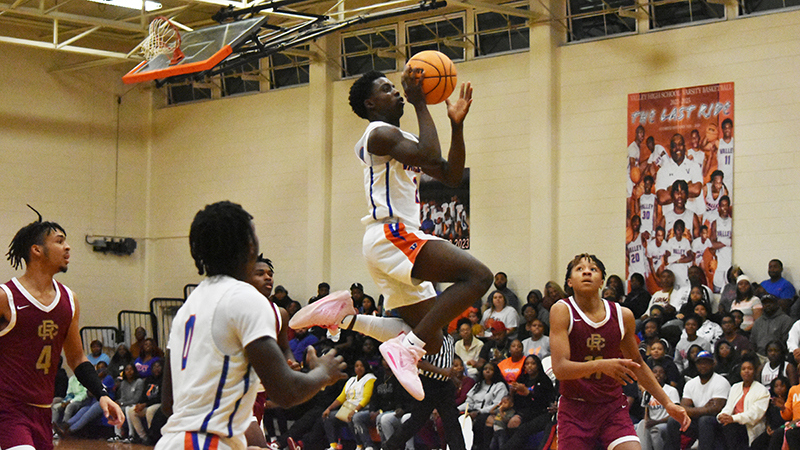 The Valley boys basketball team seems to be the team to beat in 5A so far as they dominated the Russell County Warriors 64-44 at home on Monday to stay undefeated.

This has been the story of the season as the Rams haven’t skipped a beat despite playing three games in four days.

Valley head coach Marshon Harper is pleased with how his guys fought in a dominant win.

“It was a total team effort,” Harper said.

“We got off to a little of a slow start, but the guys picked it up. We were up by nine at half and just put it away in the third quarter. The kids have been working hard. We’ve been running and lifting to prepare ourselves for games like this. We have to get some rest tonight and go to Bullock County tomorrow.”

Although the Rams got off to somewhat of a slow start going down 8-14 in the first quarter, the team started heating up thanks to big plays by key contributors.

Once again Cam Dooley was flying all over getting steals and blocks while Brandon Thomas used his height and length to crash the boards.

The Rams went down 10-14 at the end of the first quarter, but they stormed back in the second quarter thanks to eight points from Jay Harper.

The Rams outscored the Warriors 23 to 10 in the second quarter to give Valley a 33-24 lead at halftime.

Jamarious Martin led the Rams in scoring in the first half with eight points.

The third quarter was complete domination by the Rams as they continued to be more physical in the paint and grabbed more rebounds than the Warriors.

Cam Dooley scored 12 of Valley’s 18 third quarter points, and the Rams went into the fourth quarter up 51-35.

Valley was able to put their reserves in during the fourth quarter, and they showed some promise as well against Russell County’s starters.

Denali Dooley, Jalen Hardy, Jayden Thomas and Kendall Parker were all able to generate some points in the fourth quarter.

Dooley also had 11 rebounds, a steal and a block.

Marshon Harper was pleased with how his team played on the boards.

“We shot the ball better, and we knocked down some free throws. They had a scrappy team, and we played well. We have the will to win. I told them to go out there and play and have fun. They’ve bought in, and they play hard.”

Harper feels like he knows what his team’s identity is.

“We’re scrappy on defense, and we can get up and down the court,” Harper said.

“We can play man when we need to, and we can trap.”

The Rams will travel to Bullock County on Tuesday for their fourth game in five days.