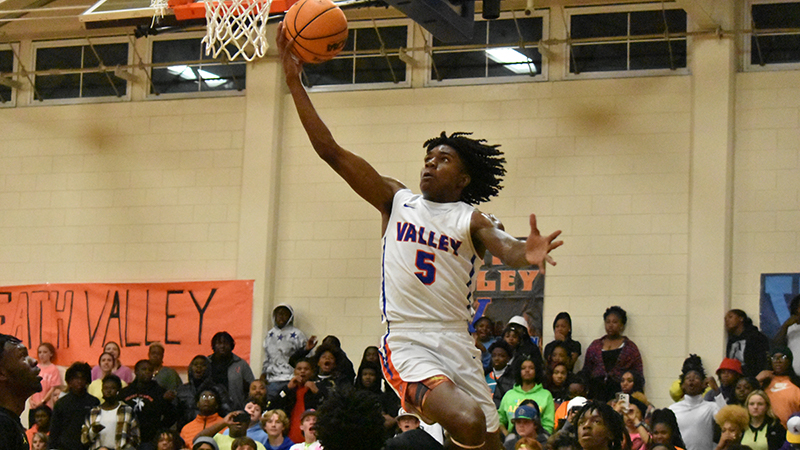 The Valley Rams opened their season with a complete 64-48 victory over the LaFayette Bulldogs at home on Friday.

Both teams played well, but the Rams were able to win every part of the game to get a big opening win.

The first half was an physical showcase for both teams as they each tried to dominate in the paint.

Neither team was making noise on the perimeter, but the Rams were able to use their height and athleticism a little more than the Bulldogs.

Valley head coach Marshon Harper is pleased with how his guys opened the season.

“I think we played well as a team,” Harper said.

“We had a lot of people that contributed tonight. It wasn’t just five people. We played good defense. We did a lot of good things, and I’m proud of them.”

“The past couple games our offense hasn’t been on,” Lewis said.

“We’ve played really good defense, but Valley is ranked in the top 10 in 5A. They have two standout players with Cam Dooley and Brandon Thomas. We just had 8 to 10 travels. We just threw it right to them, so it’s little stuff like that.”

Valley got off to a quick 9-2 lead, and a couple dunks from Cam Dooley and Brandon Thomas got their student section rolling.

After being up 15-6, the Bulldogs went on a seven point run to give the Rams their smallest lead of the game at 15-13.

However, Valley just continued to dominate the boards and take advantage of LaFayette turnovers.

LaFayette just couldn’t seem to limit its turnovers, and the Rams slowly extended the lead in the second half.

The Bulldogs closed the lead to 36-32 in the third quarter, but Valley’s defense was able to force more turnovers.

LaFayette was never really out of the game until Valley took a 56-44 lead late in the fourth quarter.

The Bulldogs will have a long break before they play Beulah on Dec 1.

The Rams will play three more games in four days, starting with Troup on Saturday.

Harper knows that his team must stay conditioned to make it through the early stretch.

“We’re going to have to get a lot of fluids. Conditioning is going to be off in the first game, but we have to be hydrated.”

Harper also knows what his team needs to work on before the game against Troup.

“We need to work on turnovers,” Harper said.

“We can’t relax when we’re up. LaFayette has a good team. I knew they were going to come in here and play hard. It was intense in the first quarter.”

Lewis wants his team to work on their offense during their mini break.

“I like the fact that we’re in shape,” Lewis said.

“We didn’t run out of gas. We just need to take care of the ball. We need to find our shooters. We need guys who are more consistent with shooting the ball. My guards have to get back to playing good basketball.

Valley’s Jamarious Martin led the Rams in scoring with 14 points while LaFayette’s Vaderrian Story led the Bulldogs with 22.