Valley High teacher of the year motivated by her students 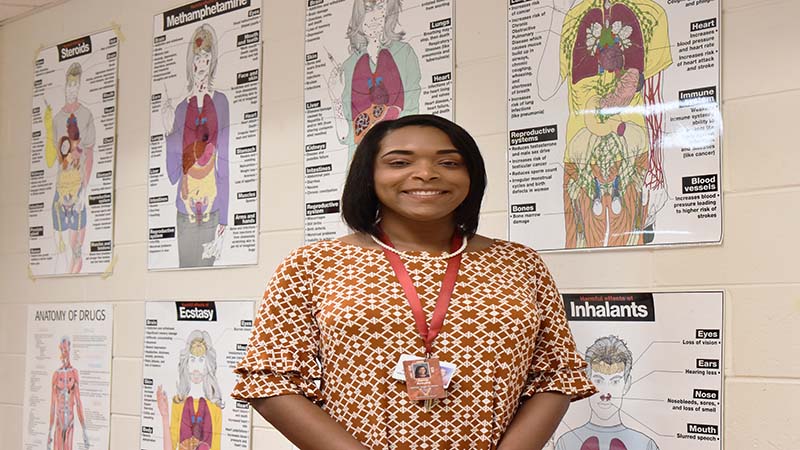 In only three years, health education teacher Janie Arnold has already made an impact on Valley High School.

Arnold was recently named the school’s teacher of the year.

“I try to be positive and encouraging to the students,” Arnold said. “I’m just trying to make them smile because sometimes they come in and they’re a little negative, or maybe they have something going on at home, and so I’m just trying to be more positive.”

Arnold, a native of Montgomery, Alabama, attended Brewbaker Technology Magnet High School. She is a two-time graduate of the University of South Alabama, where she earned her bachelor’s and master’s degrees in health education.

During the pandemic, Arnold completed her graduate degree and began a job search. At the time, Arnold was looking for any job that would get her foot in the door. She saw that Chambers County was close enough to home that she could commute. When she applied, she had no idea how well-suited she would be to the school.

“It didn’t matter to me where I worked,” Arnold said. “It’s really worked out. I really do like it here … and it has a great community feel, which I like, and so I’m glad I chose Chambers.”

Arnold was excited to work with a similar size and background as her student teaching position. However, it was also important to her to have diversity in her work environment where she would feel like she was making a difference.

“I wanted to be able to teach students that were not only like me but also from different backgrounds,” Arnold said. “Something else I was looking for was somewhere where I could truly make a difference, and where I actually feel like I’m at home, and I can really do my job.”

Although she wasn’t aware of it, those around Arnold began to take notice of the care and effort she put into her job. The health teacher cultivated a positive, accepting atmosphere in her classroom. As much as her spirit of positivity puts her students at ease, she also insists on everyone treating each other with respect.

One project that Arnold feels especially proud of is her baby project. Each year during the lessons on the reproductive system, the students are given a flour sack to dress up as a baby and learn about the responsibilities of parenthood.

“The students actually look forward to doing it every year,” Arnold said. “Once they actually do it, they learn a lot, not just about health education but applying things to their own personal lives. That’s something that I’m actually really proud of, that they actually enjoy learning in my class.”

On top of her efforts in class, Arnold is also a mentor to her students. She served as the bowling coach from 2020 to 2022 and has served as the head tennis coach from 2021 to present. Arnold loves the extra time for connecting and mentoring that coaching provides.

“I’m able to mentor them as well outside of school,” Arnold said. “So not only do we talk about school, but we talk about stuff that they have going on, whether it’s college-related, or some of them work, just getting to know them.”

Like most people, Arnold has had her moments of doubt. Earlier in the year, she found herself doubting her worth. Luckily, the Teacher of the Year award could not have come at a better time. Her students and peers had seen the work she put in.

“Earlier this year, I was like, ‘Is this really what I want to do?’” Arnold said. “Even though this is the beginning of my third year, it’s just a reminder that this is what I’m supposed to be doing. I am walking in my purpose. I am making a difference in the lives of the students.”

Though Arnold is honored by the recognition, she said ultimately it is the students who keep her passion burning.

“At the end of the day, it is about them,” Arnold said. “So that’s what motivates me.”