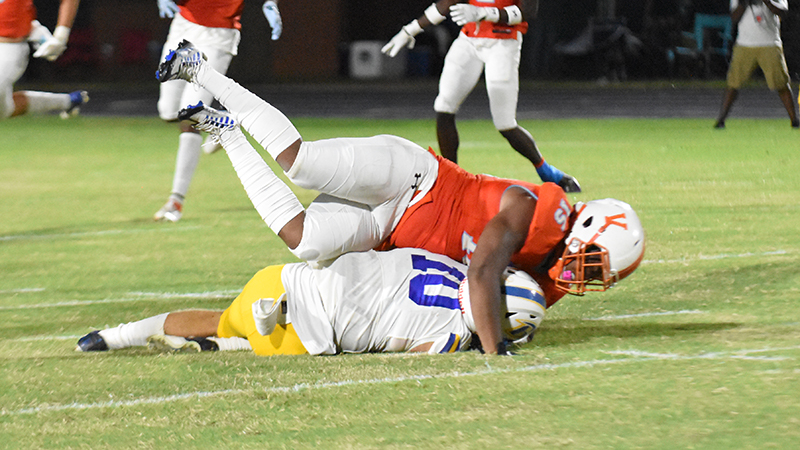 Valley High senior Quen Story wrapped up his final season on the Rams’ football team, but he still has basketball to look forward to in the winter.

Story has been playing football since seventh grade, and he joined the Valley varsity team as a freshman.

Story became the starting defensive end for the Rams in his sophomore year.

He decided to play two sports to stay physically fit.

Story has also grown as a player over the past three years.

“I was really small in the tenth grade,” Story said.

“I was in the weight room over the years. I ate right and took care of my body. I started to see progression.”

Story is pleased with how he ended his final year playing football for the Rams.

“I feel like we did pretty good. I wouldn’t want to end it with any other team. I love my guys. I feel like I could’ve done more. I didn’t perform as well as I should have in certain games, but I love my career at Valley High.”

Valley’s football season ended on Oct. 28, and Story is using the time off to prepare for basketball season, which starts on Nov. 18.

“I’ve just been working out and going to basketball practice,” Story said.

Story plays center for the Rams on the hardwood, and he’s looking forward to being a part of a solid squad.

“We have a pretty good team,” Story said.

“We just have to learn each other. We know each other, but we have to lock in and practice. We have to be serious. We have to make it past the first round, so we have a chance to make the championship.”

One of the challenges Story faces before basketball season is making sure he’s physically prepared after football season.

“You put on weight during football season, and then you have to lose some of it for basketball,” Story said.

“You have to move a little faster on the court.”

Story’s favorite memory of playing at Valley was his final game on the field.

“It was my last time playing with the juniors, sophomores and freshmen as well as the coaches,” he said. “ The guys are like family to me.”

Story plans on attending college and pursuing a degree in business to become a real estate agent.

He also would like to play football in college, but he’s undecided as to where he’s going.