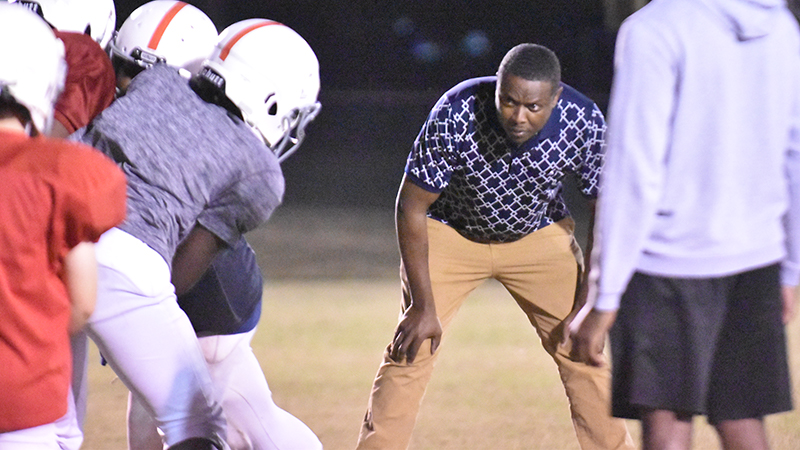 The West Point Johnny’s Pizza youth football team has clinched a spot in the Textile Bowl for the third straight year, and head coach Henry Hutchinson is preparing his boys to face the Hogansville Jets.

Hutchinson’s team had a solid season, and his team did enough to make it to the championship.

“We went 4-2 in the regular season,” Hutchinson said.

“We lost to two really good teams. We had some issues early on that were fixed to get us to this point. We beat a really good team in the second round of the playoffs that went to the wire. This will be our third Textile Bowl in a row. We won one, and we lost one. Hopefully, we can redeem ourselves. We have a good group of kids, and I think we can have a good showing come Nov. 14.”

Hutchinson knows he’ll have his hands full with the Jets.

Hutchinson is working with his players to improve their physicality on the field.

“We want them to be more physical, and we want to keep them focused,” Hutchinson said.

“That’s one of the things we focused on at the beginning of the season. We just want to be ready for the playoffs. We’ve gotten to the point where we’re peaking at the right time. We’re a totally different team from game one.”

Hutchinson is excited that his kids will have a chance to play a championship game at Callaway Stadium.

“It means a lot to them,” Hutchinson said.

“This group is very young. We have a lot of kids that are playing football for the first time. We thought it was going to be a challenge. A lot of them came in and didn’t have a lot of confidence, but they challenged themselves. As the season progressed, they got that confidence. I think they’re mentally focused now.”

Hutchinson had high praises for Eerion Jones, who has been a key piece on both sides of the ball.

“This kid has came into his own,” Hutchinson said.

“When he came to us, he hadn’t ran the ball that much. We had a plan for him. He had been playing defensive lines. He’s now one of our biggest players on offense and defense. He’s a very physical kid, but he’s a good kid overall. He’s very respectful and coachable. He’s had a great season.”

Jones has enjoyed his season so far.

“It’s been great because I never got the chance to run the ball,” Jones said.

“I’m really excited to play in the Textile bowl because half my family is coming,” Jones said.

“If we win, I get a big prize. I won’t say what that is. My little sister is coming. She hasn’t seen me play yet, and she’s excited. I want to help them win another championship.”

Jones likes football, but it’s not his main sport.

“Baseball is my main sport, but I want to keep playing football,” Jones said. “My uncle plays softball, and I’ve been practicing with him.”

The Textile Bowl will be played at Callaway Stadium on Nov. 14.