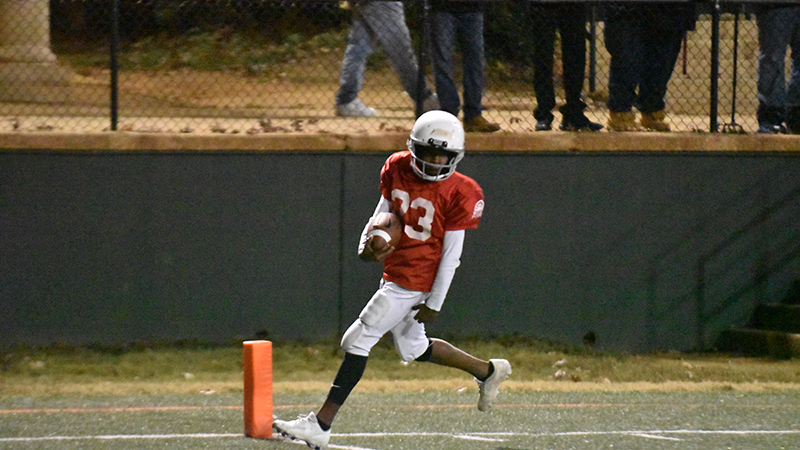 The West Point Johnny’s Pizza Raiders fell to the Hogansville Jets 30-28 in the Textile Bowl on Monday at Callaway Stadium.

Despite the loss, West Point head coach Henry Hutchinson was proud of his players.

Hutchinson was proud of his players despite the loss.

“I’m proud of the way they fought through,” Hutchinson said.

“Any other team would’ve given up. These guys came back. Two field goals, and we would’ve won. I can’t ask for anymore. The team we lost to was undefeated.”

Hogansville head coach Quantavius Leslie was pleased with his team’s performance in their win, especially since they repeated as Textile Bowl winners.

“We came out here and handled business like I thought they would,” Leslie said.

“Last year we won the Textile Bowl, but we didn’t go undefeated. It means a lot to the team.”

The game started out rough for the Raiders as they threw an interception, and the Jets returned it to the Raider three yard line.

The Jets took no time at all as Hogansville’s Dwight Hardaway scored with 2:40 left in the first quarter to make it 8-0.

The Raiders bounced back with a rushing touchdown from team MVP DeQuavion Towles with 5:51 left in the second quarter to make it 8-8.

The Jets were able to rebound with a kickoff return touchdown from Dewonyah Ellison to make it 16-8 Jets.

The Raiders struggled to move the ball on the next drive, and the Jets were able to capitalize on a turnover on downs.

Hardaway was able to score his second rushing touchdown of the night to extend the Jets lead to 24-8 with a minute and a half left in the first half.

Things were starting to look grim for the Raiders at halftime, but they opened the quarter with a key turnover on downs.

The Raiders started the drive on the Jets 20 yard line, and Towles had a nice rushing touchdown to close the lead to 24-14 after a missed extra point.

The Jets were able to extend the lead to 30-14 after Hardaway’s third rushing touchdown.

The Raiders showed a sense of urgency on the next drive as they started passing it more.

West Point’s Andrew Rudd hit Towles for a passing touchdown to make it 30-20, but the Raiders missed the extra point.

Hutchinson decided to try an onside kick, and the Raiders were set up with good field position.

Unfortunately for the Raiders, they couldn’t convert the onside kick, and the Jets took home the victory.

Hutchinson wants his players to learn from the loss.

“I want them to learn not to quit,” Hutchinson said.

“When things aren’t looking your way, you have to just look up. You have to ask yourself if you gave up or fought all the way through. We came up a little short, but you can’t ask for more than that.”

Although the season is over, Hutchinson will return some players next year.

“I expect to have this team back, and we’ll have some talent coming up from the nine and ten level.”