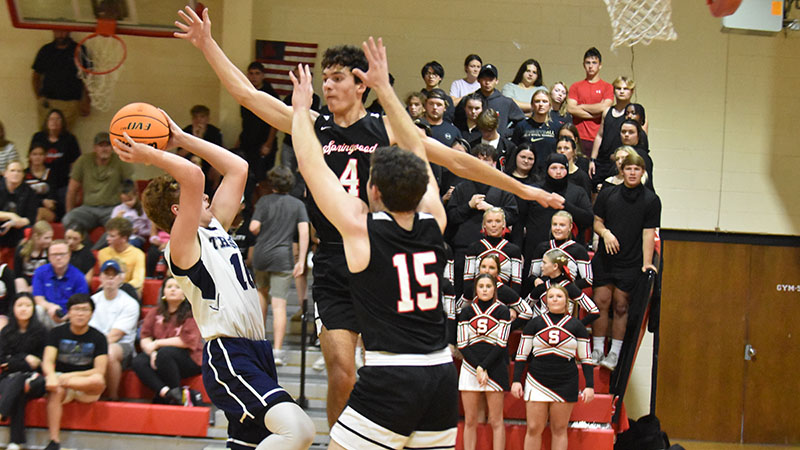 Springwood basketball opened its season at home against Trinity, and all the teams showed promise early on in the season.

The junior varsity girls took the court first, and they put up a strong defensive showing in their 35-13 win.

The junior varsity boys were next as they lost 62-3, but they played against varsity players.

The varsity girls didn’t play, but the boys finished with a promising start to the young season.

The Wildcats dominated the second quarter behind steals from sophomore Micah Thomas.

Trinity only scored five points the entire quarter, and the Wildcats went into halftime up 25-12.

Thomas led the Wildcats in scoring with nine points in the first half.

The Wildcats didn’t slow down in the second half, and they scored nine unanswered points to start the third quarter.

They had a 23 point lead heading into the fourth quarter, and their defense continued to dominate.

Eli Westbrook was the leading scorer for the Wildcats with 15 points.

Thomas was second on the team with 11.

Springwood head coach Lisa Sampson was pleased with how her team performed, but she still wants to see more.

“It definitely looked like the first game of the season,” Sampson said.

“I thought we did some good things. They were ready to play. They were hyped up. We have to settle in and fix some things, but it was definitely a good one to start with.”

Sampson was also pleased with Westbrook and Thomas’ performance.

“I expect them to play well,” Sampson said.

“They’re our leaders. They did play well, but they have to let the game come to them. We have all kinds of scorers on the team.”

Springwood was able to dominate Trinity with a suffocating defense.

“We have to play that way,” Sampson said.

“It’s part of who we are. We have to get after it, and I like what I saw today.”

The Wildcats were also able to dominate on rebounds.

“We’ve been lacking in that for years, and we’ve been strong on the boards.”

The Wildcats also played without a few players who are focusing on football until the playoffs are over.

Springwood will play Trinity at home again on Tuesday.