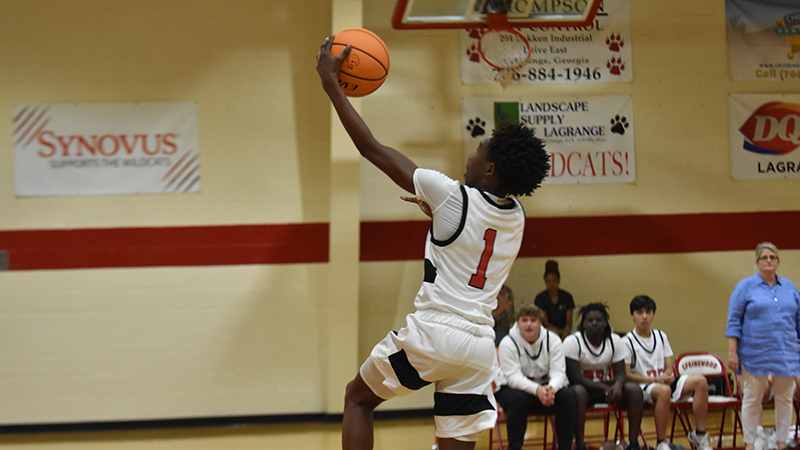 The Springwood boys basketball team showed dominance on the hardwood with a decisive 78-29  victory  over Trinity Christian at home on Tuesday night.

This was the second game the Wildcats played against Trinity Christian, and it resulted in a lot of optimism for the Wildcat basketball program.

The Wildcats were able to create a massive lead in the first quarter thanks to strong defensive performances from Micah Thomas and Daniel Westbrook.

The Wildcats were able to get this win without their football players, who are preparing for a playoff game.

Springwood opened the game with a 14-0 run, and they eventually grew the lead to 17 by ending the first quarter up 27-10.

The Wildcats started another run in the second quarter up 29-13, and they scored 19 unanswered to extend the lead even further.

Springwood went into halftime up 57-15, and it never looked back in the second half .

Sophomore Micah Thomas finished the first half with 24 points en route to a game high 26 points as he sat most of the second half.

The last few minutes of the second quarter and the entire second half were played with a running clock.

Scoring continued to be no issue for the Wildcats in the third quarter as they opened up with a 6-0 run.

Springwood went into the fourth quarter up 69-21, and they were able to rest their starters for the rest of the game.

The younger players still were able to take care of business as they scored nine in the fourth quarter with a running clock.

Springwood head coach Lisa Sampson was impressed with her team’s dominant win despite being without their leading scorer, Eli Westbrook.

“I feel really good,” Sampson said. “Eli tweaked his ankle last game, so we held him out. It was a challenge to the others to step up and prove that they could win without their leading scorer. They did, and I’m proud of them.”

Sampson was also impressed with Thomas, who was a force both defensively and offensively.

“I knew Micah had that in him,” Sampson said. “I was just waiting for it. He’s a special player, and he’ll continue to develop. He’s a true point guard, and we have to coach him.”

The Wildcats are now 2-0 to start the season, but Sampson feels like they can be even better when they get their football players back.

“We’re still missing four players,” Sampson said. “We’re practicing without them, and it’ll be great once we get them back. We’ll feel like we have all the pieces to do something special.”

Sampson still saw some things that need improvement despite a dominant win.

“I talked to them about sharing the ball and making the extra pass,” Sampson said.

“I thought they did a better job tonight. We put in a press defense. That was the first time we did that, and I liked how it looked.”

Sampson was pleased with how her boys were able to score from not only the post but the perimeter.

“I really liked our outside scoring,” Sampson said.

“Our shooting was better, and we had an inside presence with Fuller. From where he was last year to where he is now is unbelievable. I’m expecting great things from him.”

Sampson feels really good about the team she has heading into the rest of the season.

“We have a long way to go, but I like the pieces we have. I’m excited to see what we can do.”

The Wildcats have outscored their opponents 135-59 in their two games against Trinity, and they’ll return home to face Cavalry on Thursday.