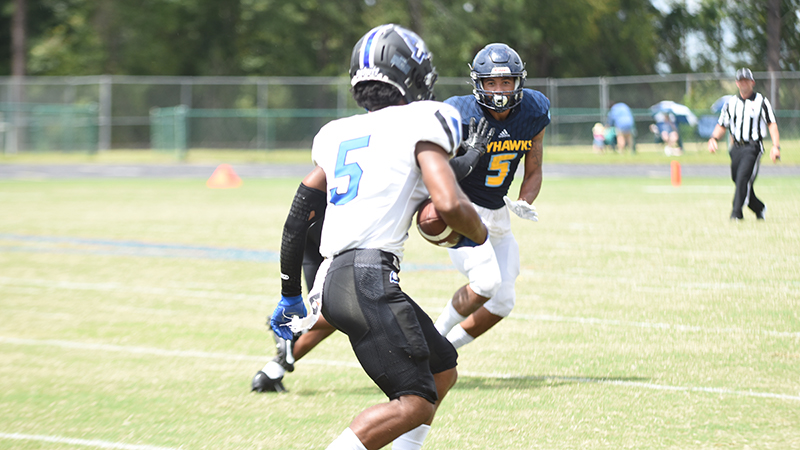 Point University linebacker Aaron Anderson has been a member of the Skyhawks for four years, and his work has paid off as he was named an Associated Press NAIA first team All-American.

Anderson was a force for the Skyhawk defense with 90 tackles, 12 tackles for loss, three sacks, two forced fumbles and a fumble recovery in his senior year.

Anderson was proud to have his efforts recognized.

“I’ve been trying to manifest this for the past four years since I’ve been at Point,” Anderson said.

“For it to actually come means a lot to me.”

Anderson decided to become a Skyhawk because he wanted to play football.

“My high school best friend, Chase Turner, was there at the time,” Anderson said.

“I wasn’t in school, but he ended up putting me on because he knew I wanted to play football. He got me into a tryout, and I got a scholarship.”

Anderson was a running back at Point before he switched back to his high school position of middle linebacker.

Anderson has been a defensive leader for the Skyhawks despite the program having its own struggles.

“In the game of football, winning is a big part of it, but it’s not all of it,” Anderson said.

“Point really does a good job of working on men and improving their character. They do a good job of turning that success into other areas. I’ve been able to develop myself and have the support of all the coaches and players. I feel like everybody on Point is an All-American. It’s a great place to become great.”

Anderson is pleased to earn his first All-American selection in his final year at Point.

“I always knew that if you put in the hard work with consistency that it’ll pay off. I’ve seen that in a lot of people close to me. It’s a great achievement, but something has to pay off eventually.”

Anderson feels like potentially playing his final season of football gave him a chip on his shoulder.

“I feel like it was crunch time,” Anderson said.

“My career was coming to an end, and I just wanted to go out with a bang or continue my football career. I felt like my career was about to be over with.”

Anderson was able to have his great season despite Point being led by first year head coach Trevor Zeiders.

“It was an adjustment but in a good way,” Anderson said.

“He’s a great coach. He knows what he’s doing. He put me in the best possible position to succeed.”

Anderson doesn’t have any favorite memories while playing at Point, but he’ll always remember how it gave him a chance to get back on the field.

“After sitting out a couple years of football and not being in the environment helped me realize that every moment in that environment is special,” Anderson said.

“Everything from the locker rooms, the practices, the workouts and the team bonding I love.”

Anderson is going to miss being a Skyhawk.

“I’m going to miss my teammates and coaches,” Anderson said.

Even though his Point career may be over, Anderson still plans to play at the next level.

“The plan is to go pro,” Anderson said.

I have high hopes, and I have a lot of faith. I feel like I’ve done everything I can to be given a chance. I’m just praying for something to come next. I feel like I need to go back to the basics. I need to train and go out on the field by myself. I know I need to put in more work than the next person and go hard. I can’t get complacent.”

Anderson knows that football has helped him grow as a person.

If football doesn’t work out for Anderson, he would like to own his own business.

“I would like to either have a clothing brand or own some type 0f business,” Anderson said.

Anderson knows that no matter what happens, he’s still going to work toward a professional football career.

“I’m ready to climb the ladder. I don’t plan on being average. Being an All-American is a great accomplishment, and I’m grateful for everyone around me who helped me get to that position, but I’m not done yet.”