Auburn perimeter attack too much for LaFayette boys 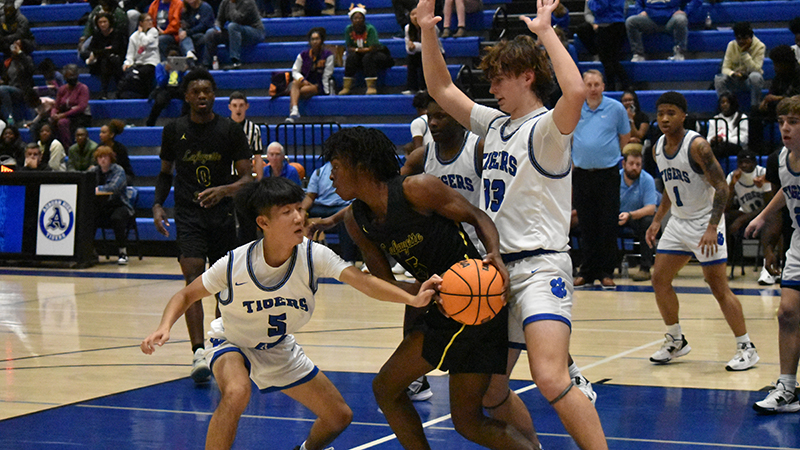 On Friday night, the LaFayette Bulldogs walked into Auburn High’s gym and took on the challenge of beating a 7A titan, but the Auburn was able to carve through LaFayette’s defense in the Bulldogs’ 85-51 loss.

LaFayette was able to hang with the Tigers early in the first quarter after being tied at 5 apiece, but the Tigers surgical attack all over the court was able to power Auburn’s offense.

LaFayette head coach Chase Lewis knows that his team was in for a tough matchup against a 7A titan.

“I don’t think we struggled too bad. Auburn is just a good team that can shoot the ball really well,” Lewis said. We played hard. I was proud of them. There are a couple of things we need to work on, but I like our chances when we enter 2A ball. We were down 10 at halftime. They have 15 players. All 15 can play and shoot the three ball. We held in pretty good. We had a good run, but they pumped it back up.”

The Tigers took a 6-10 lead at the end of the first quarter, but the Bulldogs were able to find some offense in the second quarter scoring 14.

The Bulldogs couldn’t handle Auburn’s perimeter attack, and the normally stingy defense gave up 34 in the first half to go down 34-24 at halftime.

Lewis told his team to calm down at halftime.

“I just told them to stay composed,” Lewis said.

“We talked about things we needed to fix. We just need to make sure we can make shots because they have so many guys who can hit the three ball. If we don’t make shots at a higher level, we’re going to be in trouble. We didn’t make shots.”

The Tigers mounted a 9-0 run to open the quarter, and the Bulldogs only put up 12 in the third quarter.

Lewis knows that his guys were struggling a bit to open the second half.

“We just got hit in the mouth,” Lewis said.

“When they hit us in the mouth, we just couldn’t get back together.”

The flood gates opened for Auburn in the fourth quarter as they were knocking down shots from the perimeter while the Bulldogs couldn’t outscore them.

Auburn scored 33 points in the fourth quarter to secure the victory over LaFayette.

The Tigers hit 13 three-pointers as a team to take down the Bulldogs.

Lewis isn’t too worried about the game because he feels like his guys will still be competitive at the 2A level.

“I want to be a great basketball team,” Lewis said.

“I thought they did well. They played hard. We played the same way we did the whole season, but it was against a very good team.”

Lewis was pleased with Vaderrian Story, who had a team high 19 points.

“He’s stepping into his own as far as taking over the scoring load,” Lewis said.

The Bulldogs won’t have a lot of time to fix things as they have to face Carver-Montgomery on Saturday.