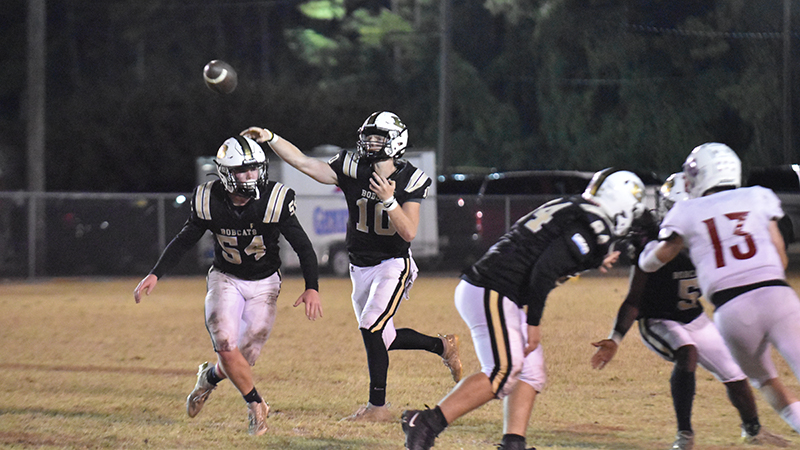 Beulah senior quarterback Noah Higdon has been the leader of a Bobcat squad who have struggled with illness and circumstance over the past few years.

Higdon first started playing football as soon as he could pick one up, and he became the leader of the Bobcats by his junior year.

“I broke my arm in the fifth grade and didn’t play again until ninth grade,” Higdon said.

“I had a coach convince me to play football, and since then, it’s just been something I want to do. I was the junior varsity quarterback and receiver in ninth grade. In tenth grade, I was a receiver, and I was the quarterback by eleventh grade.”

Higdon was able to persevere when Beulah’s team dealt with Covid for a couple years.

“We have struggled lately, but it’s something I’ll remember for the better,” Higdon said.

“I won’t remember the losses. I’ll remember all the tough times we had in practice and the conditioning. It was less of a team and more of a family when we’re playing together. It’s been tough the last three or four years being cut short from COVID. It’s been tough in the weight room, and this was the first year we were really able to just grind all summer long without any hiccups. I can promise that in the next three or four years Beulah is going to take a turn.”

Higdon remembered when the Bobcats dealt with COVID throughout the whole team.

“I was in tenth grade when that happened,” Higdon said.

“We couldn’t get all the reps that we could normally get. We were limited in practice. It brought the whole program down by a year. We’re still behind.”

Higdon feels like his time at Beulah taught him a lot.

“It taught me how to overcome adversity,” Higdon said.

Beulah’s senior night ended in a close loss to Horseshoe Bend, and Higdon remembers the emotions.

“It didn’t hit me until I walked on the field for warmups,” Higdon said.

“It was more of a shock that this was my last time ever touching Beulah High School’s field. Once that first play happened, it was game on. I didn’t really think about that until they got the ball back with about ten seconds left. After that, the emotions just started coming. It’s something I’ll always remember and look back on. I wish I could do it one more time.”

Beulah head coach Matthew Johnson took over the program when Higdon was a sophomore, and Higdon knew he was a good fit.

“It wasn’t too different from our last coach because coach Johnson was the offensive coordinator,” Higdon said.

“He showed that we can win if we just stay positive. That was the biggest change.”

Higdon’s favorite memory while playing at Beulah was in his junior year.

“We were at Loachapoka for the very first game of the season, and we were playing in a river,” Higdon said.

“It was storming the whole night, and I got a 99 yard pick six in the fourth quarter. I know I’m a quarterback, but that was my favorite memory. That always stuck with me.”

Higdon is going to miss the entire school.

“The people always support you. They know your struggles and what’s happening inside those doors and how hard we were working. I’m going to miss how much of a family it was. We would throw the football around on the weekends. We’d go out to eat and spend time together like brothers.”

“Trust coach Johnson. Trust the process. They know what they’re doing. If they can just go hard in the weight room, they’ll get caught up to where they need to be. They have a bright future.”

Higdon has multiple options as far as his life after Beulah.

“I’m playing baseball here, and I’m trying to get a scholarship,” Higdon said.

“If that doesn’t work out, I’ll go to college to either be an engineer or a teacher. If I teach, I’d want to teach math. Math is fairly easy for me. It’s fun once I figure it out. I want to do something mechanical. I always loved helping my dad fix things and work on cars.”

“People always say that it’s just Beulah, but it’s one of the best schools around here, and people don’t give it enough credit. The community is amazing.”