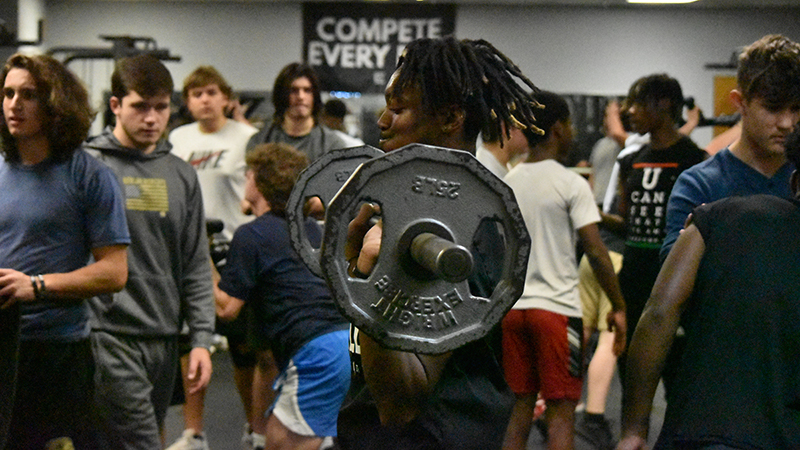 In the past, Beulah High’s workout program consisted of players working out during P.E. class, but now the Bobcats have instilled a brand new workout program that will make sure every athlete puts in as much work as possible.

All the Beulah coaches along with Athletic Director and Principal Adam Johnson helped form a new plan that scheduled specific times for certain age groups.

For football head coach Matthew Johnson, he’s finally happy to have his players giving it their all in the weight room.

“We finally have everybody available to take part in the offseason workout program,” Johnson said.

“It really starts from the top to the bottom. Our principal, Adam Johnson, created a schedule where all athletes are able to take weight training. We split it up by 45 minutes where one group is in the weight room and the other is doing biometrics and speed work. This is the first time we’ve been able to get the whole school in at the same time. It’s better late than never. I wish we could’ve done this years back. I told the parents that we’re doing it the right way now. It’s going to take awhile, but we’re seeing progress. Our guys are bigger and stronger. You can see the progress in our male and female sports.”

Johnson feels like his players are buying into the workout program.

“These are some hard working kids,” Johnson said.

“They know where we have struggled, and that’s with being physical. They want to get better. They don’t like getting defeated on the football field.”

“It’s more organized than the past few years,” Higdon said.

“It’s going to make us better. It makes us feel like we’re getting more ready. We’re working harder than other schools have been, and I haven’t felt that since I’ve been here. I’m lifting as much weight as possible and trying to condition my body so I’m not sore during baseball season.”

Beulah’s Demarion Foreman plays basketball, but he’s also returning at the Bobcats’ running back next season.

“I’ve been getting faster and stronger,” Foreman said.

“I feel like the team is more together with it. I feel like we’ll be a really good  team next year. It’s helping us physically and mentally.”

Beulah softball player Abrianna Green is excited about the new program, which benefits the boys and girls equally.

“It’s really different from last year. We have an actual program that we’re going by. We’re working on different metabolical pathways, so we’re sore all the time. It’s been really good for us, and I can tell the difference in everyone’s performance. I can tell my hitting strength has increased over the course of these workouts.”