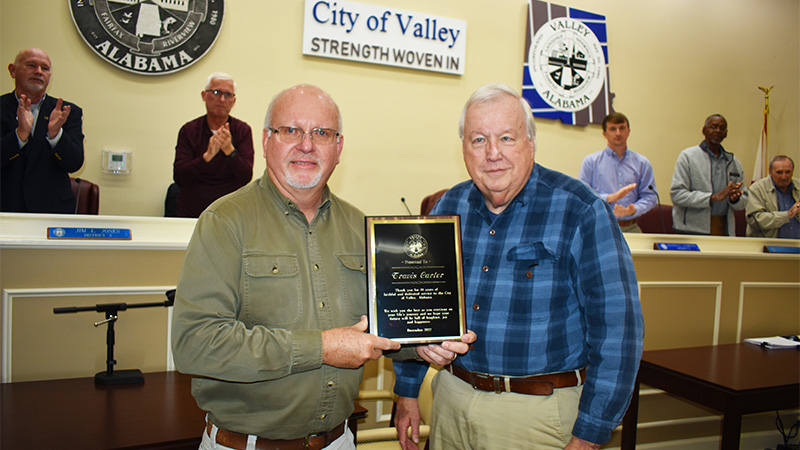 VALLEY — “It has taken a while, but it has finally gotten here,” said Travis Carter on Monday evening. “This is my final city council meeting.”

Carter has been the City of Valley’s planning and development director for the past 10 years. He is retiring from the city at the end of the current calendar year. The council won’t meet again until January 2023.

In his final meeting as a city department head, Carter advised city residents to leave their AmWaste rollout carts by the roadside following the next pickup. AmWaste will be coming by to pick up the empties before new solid waste provider C&C Sanitation of LaGrange gets started in January. They may have their cans out before AmWaste picks theirs up.

“I hope we will have better service next year than what we had with AmWaste,” he said.

Carter said the city should soon be getting a letter from the Alabama Department of Environmental Management (ADEM) listing no restrictions on the Lansdale Mill site for possible redevelopment in the future.

Carter said he had thoroughly enjoyed working for the city. “I probably had the easiest job of any department head,” he said. “That’s because I had such good staff to work with. I’m sure the city will continue to do well.”

Im presenting him a plaque, Mayor Leonard Riley said that Carter had followed about the best planning and development director a city could hope for in the late Allen Hendrix. “He knew where every house and every manhole was in the city,” he said. “Travis followed him and did a great job, too. He brought surveying and mapping skills to the office. It means a lot for city to have an employee with that kind of skill.”

The city hall offices were temporarily located in the Langdale Mill office when Carter started working for the city. There was a mold removal project going on in city hall and Valley Police Department at the time.

That part of Langdale Mill is long gone, but a significant portion still remains. There is still some hope it could be redeveloped at some point.

Members of the council took turns thanking Carter for his time with the city. “Thank you, Travis,” said District 1 Council Member Jim Clark. “We will miss you a lot. You have left some big shoes to fill. You were always so helpful whenever I called on you.”

District 2 Council Member Jim Jones thanked him for always having good advice and being very welcoming to anyone who visited him in his office at city hall.

“Me and Travis are old high school buddies,” said Randall Maddux of District 3. “Your department handled complaints from the public in a very professional manner. No one could have handled it any better.”

(It was Planning & Development that handled all the calls about trash service).

“Any time I called you about an issue in my district, you always handled it well,” said Marquetta Madden of District 4. “That means a lot to me, and I thank you for it. Your wife (Wanda) is my boss at Huguley Water. She’s retiring, too. I hope both of you have good retirements.”

District 5 Council Member Kendall Andrews said that he is the newcomer on the council and probably had been asking Carter more questions about the city that anyone else on the council. He thanked Carter on having been patient and very helpful while he was dealing with a learning curve.

“The City of Valley is losing a jewel,” said District 6 Council Member Henry Cooper. “We thank your for what you did for the city and wish you and your wife good retirements.”

“We had a lot of laughter in your office,” said District 7 Council Member Jimmy Gilson. “You are a true professional. You did a great job for the city, and everyone in Valley should appreciate you for that. Enjoy your retirement. You deserve it.”

Carter probably won’t be idle. He has considerable skills in surveying and designing house plans. He will likely remain active in some capacity.

After the council meeting, Carter and family members were treated to a reception in the conference room at city hall. All enjoyed slices of ice cream cake from Dairy Queen.