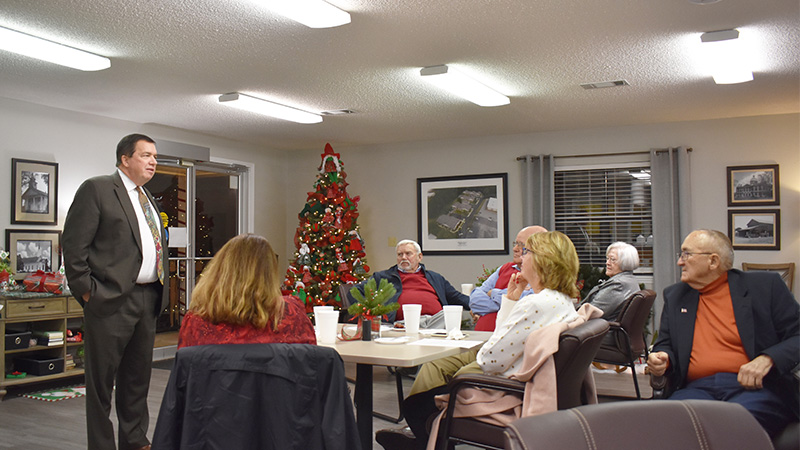 VALLEY — David Owen, the assistant superintendent of the Chambers County School District, was the guest speaker at Thursday evening’s annual Christmas dinner of the Valley Lions Club, held in the community room at Sylvia Word Manor. He talked about the hearing held Wednesday before Federal Judge Keith Watkins in Opelika. Issues to be decided involve the site of a proposed consolidated high school and whether or not there should be such a consolidation in Chambers County. The judge may also decide if the two high schools should combine heading into next school year or whether that waits until the new school is built in 2025.

“One side of the courtroom was packed with people, but the other side was not,” Owen said, explaining that impacted people from the LaFayette area and rural Chambers County were given an opportunity to speak their concerns before a judge. “The judge wants to hear from everyone,” Owen said.

At the outset, December 14 and 15 were scheduled to be a trial. That was changed to a one-day hearing on Wednesday.  Next week, the judge will visit Valley High, the selected site for the new school in Valley and LaFayette High as well as the proposed site in LaFayette that had been considered by the school board.

A trial to determine the future of a new high school in Chambers County will be taking place at the George Andrews Federal Court in Opelika starting January 17th and continuing through January 19th.

The local school board approved the Valley site in October, but the ultimate decision will be decided in federal court. It’s done this way because Chambers County is still under the Lee v. Macon desegregation ruling. A total of 47 school districts in Alabama have attained unitary status but Chambers County is not one of them. Those systems with unitary status do not have to have such matters as school consolidation reviewed by a federal court.

Before the board voted the approve the Valley site, the school system had hired a consultant to weigh the advantages and disadvangestw of each proposed site. Their findings were discussed in town hall-style meetings. one in LaFayette and one in Valley.

Those findings did appear to favor the Valley site.

“Valley offered 75 acres that already had the geotechnical and environmental surveys done,” Owen said. “Those surveys had been done in recent years when the site was being looked at for possible industrial development. The LaFayette site had more than 100 acres, but much of it was not owned by the city. There were options on the land, but all the board could look at was land that was publicly owned. The environmental and geotechnical surveys have not been done n the site.”

Owen said that no recordings were taken during the hearing but he had taken 13 pages of notes. “It was like I was back in school,” he sad. “Many viewpoints were expressed on Wednesday.”

Some of those who spoke to the judge suggested an unfair process had taken place and that school officials had not be fair with what was done. Owen strongly disagreed with that. “I will swear on my daddy’s grave that nothing was concealed from anyone,” he said.

Owen added that Superintendent Casey Chambley has taken some unfair criticism throughout this process and took a lot more on Wednesday. “I think the entire county will be better off once we work through this,” Owen said.

A major factor favoring the Valley site in the consultant study is the cost of transportation. An estimated two-thirds of the system’s students attend school in the Valley zone. If the school site in in LaFayette, this number of students will be bused back and forth to LaFayette every school day.

The estimated total transportation cost to a new school in Valley is around $4 million. It’s $6.5 million to a school in LaFayette.

“There’s a savings of over $2.5 million in the transportation costs to Valley,” Owen said.

This is simple math – some two-thirds of the students won’t have two 15-mile bus rides every day.

Another huge factor is the Valley site’s proximity to Ram Stadium and the Valley Sportsplex/Valley Community Center area with its track and field facilities, tennis courts and soccer fields.

All of this would have to be built in LaFayette at a cost of at least $20 million should the LaFayette site be chosen.

Race is not a prevalent factor in this consolidation issue. It’s all about having a new high school that will be designed to house up to 1,000 students who live in Chambers County. Both Valley High and LaFayette High are schools that were designed to serve more students than they now serve. Chambers County has had a declining school population since the 1990s. At that time, there was well over 4,000 students in the system. That number has declined to just over 3,000. The biggest portion of the decrease has taken place since the final shutdown of the local textile industry in 2008. When those jobs left, people moved away to new jobs.

Most of the county’s school buildings were designed for larger school populations. The buildings have to be heated and cooled at the same cost whether the classrooms are full or half empty. “In 1991, there were 428 students at LaFayette High,” Owen said. “There are 211 there today.”

“At the trial in January, the judge will decide where the school will be built or where there will be consolidation at all,” he said.

The U.S. Justice Department will also have a say. “They will either let us figure it out or decide for us,” Owen said. “I would prefer for us to do it.”

The NAACP Legal Defense Fund is representing the plaintiffs in the case.

School systems that do not have unitary status are under Justice Department oversight.

Owen said that hiring school personnel is a problem right not.

“It’s such a challenge,” he said. “Teachers can give only 30 days notice that they are leaving. They have you over a barrel. The kids are what’s important. It’s rough when you put someone in a classroom and they can leave you in 30 days.”

Owen told members of the club that the Lions have a special place in his heart.

“My dad was a Lion,” he said. “When I was a kid growing up in a small own in Massachusetts, I used to sell light bulbs for the local Lions Club. “

In the 1970s, Owen came south to attend the University of Alabama. “I have been in the South ever since,” he said. “The weather is so much better here.”

He does go back home to visit his mother, who’s 98 and lives in assisted living. Owen is very supportive of his long-time friend Casey Chambley.

“I have known him for 15 years,” he said. “He is in a very difficult position right now. No one knows what it’s like unless they have been in his shoes.”

Owen believes the school system is heading in the right direction with the proposed K-8 STEAM magnet school, the Inspire Virual Academy, career tech education and with its extracurricular acuities.

The magnet school will offer explicit instruction and interdisciplinary performance tasks in science, technology, engineering and math. Inspire Academy offers virtual education in grades 7-12. Career Tech has 13 different CTE programs, and the system has over 50 different club and athletic activities.

Under the new agreement, STEAM Teams of Chambers County will be formed, and SOLV Energy will provide crucial resources that will allow STEAM Teams to expand the promotion of STEAM education throughout he county while recruiting students for participation in the Modern Manufacturing program at Inspire Academy.

“Building upon the proven success of Piedmont Motorsports and Inspire Academy’s Engineering Technologies program, STEAM Teams will finally have the resources needed to greatly expand their programs and impact,” Owen said. “This will result in increasing their competition teams, outreach activities and after school offerings.”

Owen said that STEAM Teams, Inspire Academy and Piedmont Motorsports were honored by this commitment on the part of SOLV Energy to assist in the growth of these programs and their competitiveness on the state, regional and national level.