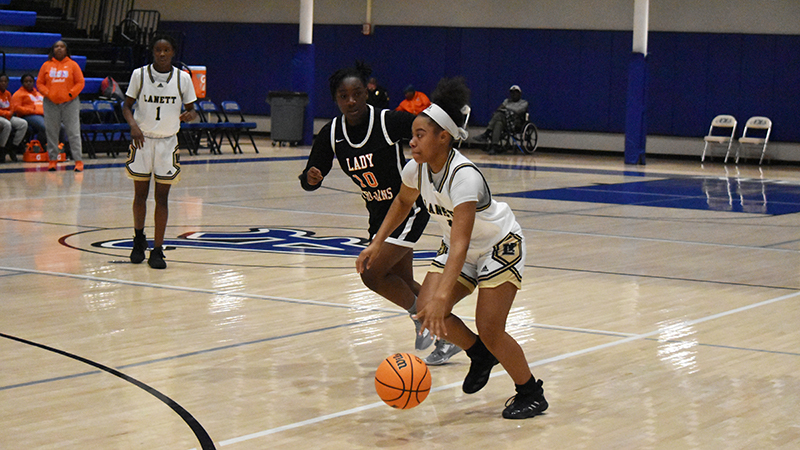 It was a chippy game for Lanett, but the Panthers were able to overcome double digit fouls in the first half to defeat Charles Henderson 55-46 at the Auburn Christmas Tournament on Friday.

The Lady Panthers depended on youth to lead them to victory with freshman point guard Nakeriona Heard scoring 11 in the first half.

While Heard was carving through the paint, sophomore Makiah White was crashing the boards and preventing the Trojans from creating second chance points.

Lanett head coach Charlie Williams was pleased with the win, but he knows they needed to be more balanced on offense.

“We turned the energy up in the second half,” Williams said.

“It was a flat game. They had exams all morning, and we had to jump on the bus and play. We’re a balanced team, but we had a bad game on the outside. That’s going to happen in tournaments.”

The Lady Panthers struggled with some turnovers in the second quarter, but they were able to grab some momentum heading into halftime as Heard drew a shooting foul with 0.1 seconds left in the half to give Lanett a 24-23 lead.

It was more back-and-forth defense in the third quarter as neither team could knock down a lot of shots.

Lanett’s White continued to be a dominant force on the interior, and the Lady Panthers took a 38-33 lead heading into the fourth quarter.

Williams was pleased with her performance.

“Her defense has really progressed since last year. She took a step up.”

Charles Henderson came out strong at the start of the fourth quarter by cutting Lanett’s lead to one, but frustration started to set in for the Lady Trojans when they committed a technical foul with four minutes left to give Lanett a six point lead.

The Lady Panthers are now 5-1 on the year.