Hyundai buys $5,000 worth of Christmas gifts for local families 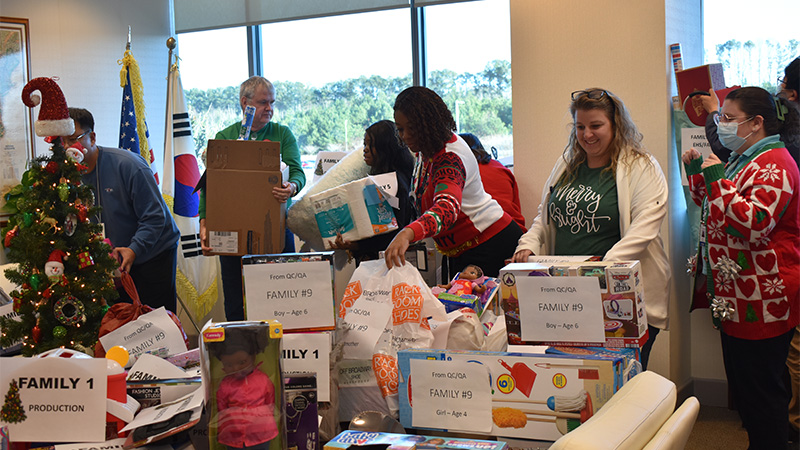 Hyundai Mobis in West Point employees partnered with the Christian Service Center to collect over $5,000 worth of Christmas gifts for 10 local families for the 12th year.

“Each department really looks forward to it because it really does bring them together to do the most important thing, and that’s giving back to the community … It’s about the giving,” said Event Planning/Community Engagement Manager Natisha McGhee.

The Christian Service Center annually provides gifts to 10 to 12 families in need. This year Mobis was assigned 10 families. Altogether the 12 departments raised over $5,000 in gifts, including board games and Domino’s Pizza gift cards.

“Because you never knew if people don’t have cars. Then they can have the food delivered,” McGhee said.

Though they receive anonymous lists of the children’s wants and needs, the staff often exceeds that with extra presents, McGhee said. Payroll Assistant Manager Jennifer Allen, who previously worked in a school, said she enjoys being able to help children in need.

According to McGhee, not only does the program give the company a chance to give back, but it also encourages team building and bonding between the staff. McGhee assigns one family to each department of Hyundai Mobis. The staff then collects money for the gifts and then picks them out together.

“Anytime you have a department of people and teams that come together, it’s a win-win,” McGhee said.

Allen has worked at Mobis since 2012 and has participated in the CSC gift charity every year. She said that the time the departments spend shopping helps build relationships between the staff.

“When we come to work, we sit at our desks, and we’re so focused on what we’re doing at our job that we don’t get to spend much of that personal time,” Allen said. “Being able to come together and do that shopping, you laugh, you cut up, you share stories about the different toys.”

Hyundai Mobis has been participating in the gift charity for the past 12 years. McGhee said when the company first opened in West Point, the leaders made it their goal to develop a partnership with the community.

“One of the most important things to us as a company is to make sure that we’re giving back to the community,” McGhee said.