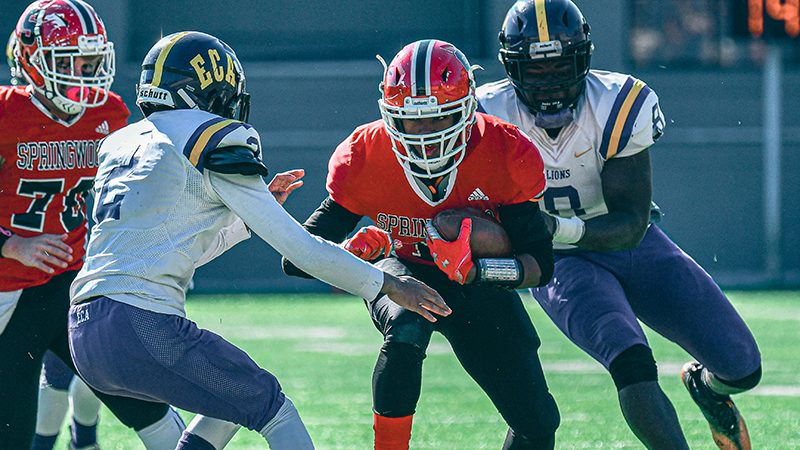 Springwood senior running back Johnathan Johnson was a key part of the Wildcats’ playoff run, but it wasn’t always an easy path for Johnson.

Johnson transferred from the Lanett City School system to Springwood in fourth grade, but he didn’t really start playing football for the Wildcats until he was in ninth grade.

“I wasn’t sure if I was going to play football for Springwood just because of how different everything felt. Over time, I got the hang of it. It took until my eleventh grade year to notice my ability. I thought about what I could do to help the team. It really hit me to the point where I felt like I could do it. It took me so long to believe in myself. The Springwood community was just so helpful. I’m just glad that they accepted me. I don’t know what I would’ve done if they didn’t. I got to grow and meet a lot of new people. The overall football experience was great.”

Johnson had to overcome the instability in the football program in his first three years on the team, but it was all worth it in his senior year.

“I’m not going to lie. It was very tough,” Johnson said.

“It was hard to keep pressing and believing in myself through all the coaches that came and left. When coach Burch decided to stay with us, it was like finding our Rambo. It was hard to trust coaches, but coach Burch showed us that he was there for us and Springwood, not just for the money or fame. I’m just extremely thankful for coach Burch. If it wasn’t for him, coach Foster, coach Plant and coach Hudson, I don’t think I would have played my senior year. I’m not saying we didn’t have good coaches the years before, but this year made a difference. We had a great connection. Coach Foster connected with us very well. I’m just happy with how the season turned out.”

Johnson was also pleased with Springwood’s transition to 8-man football, especially since it gave him more room to run.

“It was so beneficial,” Johnson said.

“I feel like we get overlooked. When we made the move to 8-man, there was a lot of backlash. A lot of people had things to say about Springwood. It was as if we couldn’t handle 11-man. It’s not that. We didn’t have the size and techniques needed to be successful in 11-man. The switch to 8-man was beneficial to us and the coaches. I’m just happy with how everything went.”

Johnson felt like the Wildcats could make the state championship after their second game against Evangel.

“The first game was just about getting back in the swing of things,” Johnson said.

“The first game for me wasn’t bad, but it wasn’t my best game. I had to get the nerves and jitters out. My second game got me in the swing of things. We just found our groove.”

Johnson was also excited to play in the state championship game.

“I had faith in the team, but I never would’ve imagined us getting there,” Johnson said.

“In the first few minutes of the game, coach Foster, who’s one of the older coaches, ran down to the end zone with me,” Johnson said.

“I was surprised that he was running, and he doesn’t really do that. When I saw him do that, I was surprised. I learned that he’s pretty quick. He doesn’t look like it, but he is.”

Johnson is going to miss playing football at Springwood.

“I’m going to miss the connection and the family feel,” Johnson said.

Johnson plans to run track in college, but he’s not sure where he wants to go yet.