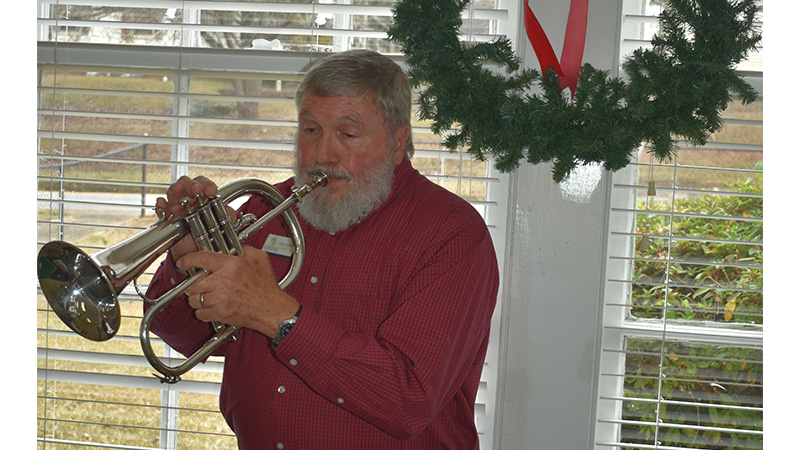 VALLEY — The Kiwanis Club of Valley members were treated to a one-man Christmas music show during their weekly noon hour meeting on Wednesday.

Gary Harris, the minister of music for Langdale Methodist Church, played the piano while leading club members in singing Christmas classics. He also played familiar holiday tunes on brass instruments such as the trumpet, cornet and flugelhorn.

Harris comes from a musically gifted family. His mother played the piano and was a talented singer. Other family members played musical instruments and did lots of singing, too.

“I started playing the piano when I was tall enough to reach the keys,” he said. “I was five when I started taking music lessons. My teacher was into classical music, but that’s not what interested me.”

She was teaching him to play Beethoven and Chopin, but he was more interested in playing the piano like Jerry Lee Lewis.

“I wanted to give music a jazz sound,” he explained.

“I was raised in Cullman, a place with a lot of German influence,” he said. “I had an uncle who could sing Silent Night in German. He tried to teach it to me, but I couldn’t learn the words.”

Harris studied music at Jacksonville State University, which is widely known for its Marching Southerners band.

“I took a piano class in college,” he said. “My teacher didn’t like it because I already knew how to play.”

Harris went on to be the band director at Cleburne County High School in Heflin for 25 years. He then taught for eight years at the Donoho School in Anniston. He liked being at a small school where he could offer students lots of one-on-one instruction. An opportunity to move to Valley came open in 2008.

“Valley is my wife’s hometown,” he said. “The minister at Langdale Methodist at the time, Roger Thompson, contacted me to tell me they needed a minister of music and they thought I would be ideal for the position.”

Harris is married to the former Linda DeLoach, who grew up in Langdale and has many family there.

“I told him I would pray over it but that I was happy where I was,” he said. “I told him that a major concern of mine was to sell our house.”

The U.S. was in a significant housing crisis at the time, and homes were hard to sell at a fair price.

“We put our house on the market, and it sold in three weeks,” he said. “I knew then that the Lord was leading me to Valley. I’m now in my fifteenth year as the minister of music at Langdale Methodist Church, and we love it here.”

People who have never played a brass instrument think it’s simply a matter of blowing into it to get the right sound. It doesn’t work that way. Even if the most talented musician blows into such an instrument, nothing but “PFFFT!” will come out on the other end.

“You make that mellow sound by vibrating your lips,” Harris said. “I play one of my horns every day. You have to have constant practice to keep that rigid upper lip you need. Sometimes, you have to be ready at the drop of a hat to perform, and you always want to do the best you can.”

When he was in his early teens, Harris was very much a fan of jazz and rock and roll music.

“I was in a band when I was 14,” he said. “We loved playing a variety of music from jazz to rock and roll to country to soul.”

Harris began Wednesday’s performance with “Jingle Bells” on piano. He then switched to a trumpet to play the 1951 Meredith Willson classic “It’s Beginning to Look a Lot Like Christmas.” He then picked up his cornet and played from memory “Frosty the Snowman.”

That cornet has a special meaning to him.

“It was given to me by a woman whose son had played it in a high school band,” he said. “He later died in a traffic accident.”

On the piano, Harris played and sang “Mary Did You Know?” with club members joining in.

His memory for music is excellent. “If I hear a melody and remember it, I can play it,” he said.

He continued with “Silent Night,” “O Come All Ye Faithful,” “Joy to the World,” “I Saw Mommy Kissing Santa Claus,” “Walking in a Winter Wonderland,” “Rudolph the Red-Nosed Reindeer,” “Silver Bells,” and “Santa Claus is Coming to Town.”

He then went back to the flugelhorn to end with “The Christmas Song (a.k.a. “Chestnuts Roasting on an Open Fire”). “It’s kind of funny it’s called The Christmas Song,” he said. “It doesn’t mention Jesus at all. To me, it’s not really a true Christmas song if it doesn’t have Jesus in it in some way.”

Harris said many people have a misconception that musically talented people are gifted.

“It may be true for some people,” he said, “but I can tell you that being a good musician is something that comes from hard work, sweat and tears. It don’t come easy. I’m sure that there are some people who have a gift for music but never pursue it. No one will ever know how good they could have been if they had gotten into it.”

Harris is a member of the LaGrange Community Band. They will have a free concert next Tuesday evening, Dec. 13 in the family life center at the First Baptist Church of LaGrange.