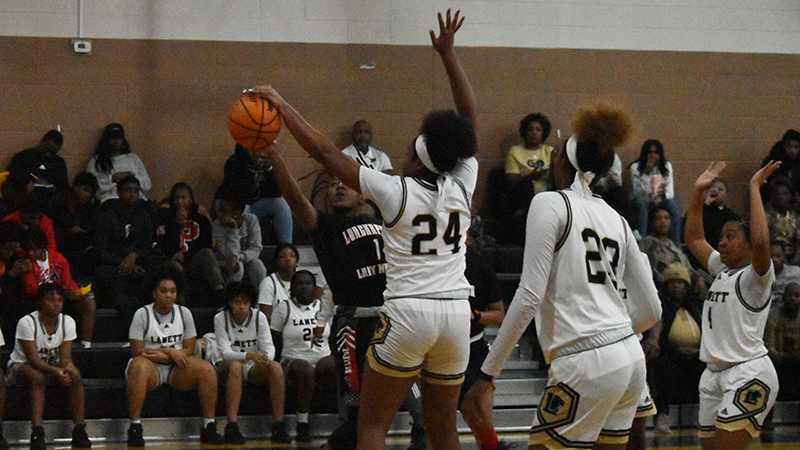 The Lanett girls varsity team looked to bounce back after a tough loss to Eufaula, and they did exactly that with a 22-19 victory over the Loachapoka Indians in the Lady Panthers’ home opener.

It was a defensive slugfest for both teams as it was 2-0 Lanett halfway into the first quarter.

Both teams struggled with turnovers and mental errors on offense, but Lanett’s Nakeriona Heard had a couple steals that turned into layups.

The Lady Panthers took a 6-2 lead heading into the second quarter, but Loachapoka’s offense started to show signs of life.

After a few key defensive fouls, the Indians were able to capitalize with free throws and cut the Lanett lead to 11-10 at halftime.

Lanett head coach Charlie Williams knows that the game was sloppy, but he was still pleased with his defense.

“They played through some adversity,” Williams said.

“It’s Christmas break. You never know what you’re going to get. I’m proud of them. They played with good energy tonight. We didn’t take advantage of a couple of easy buckets, but I’m proud.”

The second half was a lot like the first half, except both teams were struggling with officiating.

The Lady Panthers had some blocks that were called fouls, and there was some uncertainty when it came to who had possession.

Williams knows that no matter how the refs call the game, his team still had to fight through.

“We just have to play through the calls,” Williams said.

“When you’re in the state tournament, you don’t know what refs you’re going to get, so you play through it.”

After a Loachapoka basket, Lanett went into the fourth quarter up 15-14.

The fourth quarter was a slow grind for both teams as both defenses locked down while the Lady Panthers tried to hang on to the lead.

The Indians took a 16-15 lead with 6:27 left in the game, but Lanett’s Makiah White hit a close range basket to retake the lead.

There were four lead changes in the fourth quarter, and the Lady Panthers secured the victory when Ameria Truitt-Zeigler hit a free throw to give Lanett a 22-19 lead with only a few seconds left.

Williams is pleased with how his girls fought through to the end.

“We learned how to grind it out at the end,” Williams said.

“They’re special. Some of them have been with me for six years, so they know what they’re doing. When it’s your night, it’s your night. I don’t want to peak early. I want them to peak toward the end of the season going into the playoffs.”

Williams was impressed by his entire team in the win.

“Makiah White played well. I don’t have a bad report on anyone tonight. Everyone on the floor contributed.”

The Lady Panthers don’t have much of a break as they have to turn around and face a tough opponent in Troup County on Thursday.’

“We have to fix ourselves,” Williams said.

“We have to fix our mistakes. There’s no special key to guarding them. You just have to come out and hope your defense is on that day.”