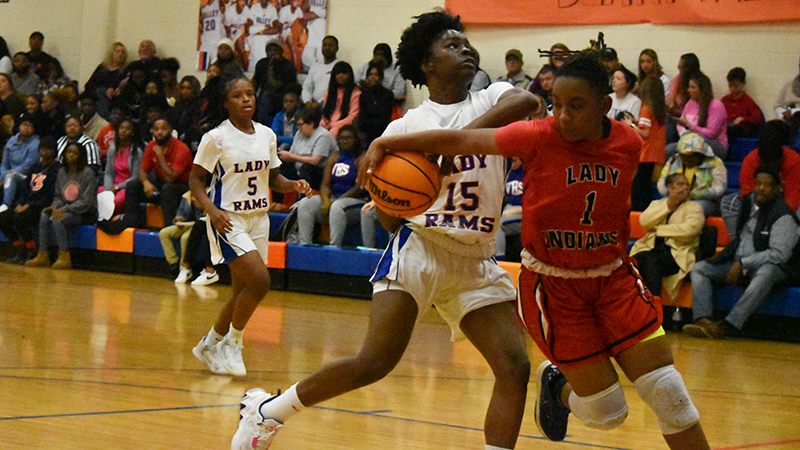 The Valley varsity girls struggled with Loachapoka’s attack in the second half during the Lady Rams’ 53-34 loss to the Lady Indians on Tuesday.

Valley’s leading scorer was Kenda Watson, who finished with 12 points.

Despite the second half collapse, Valley head coach George Grimes was pleased with his girls’ efforts.

“We played against a very good Loachapoka team,” Grimes said.

“They’re a perennial power. They took it to another level, and we have to find a way to reach that level.”

Grimes stressed intensity after the Lady Rams’ win over Tallassee on Monday, and he felt like they still showed some intensity.

“You work so hard, but they had a little 8-0 spurt, and we were back in a hole. We had to dig out. We played a back to back game, and the girls just have to learn.”

The first half was an offensive struggle for both teams, and neither the Lady Indians or Lady Rams could really create any separation.

Both teams were tied 7-7 before the Lady Indians created a lead thanks to a six point run.

It was 16-10 Loacahapoka early in the second quarter, and it took a few minutes for either team to score at all.

After taking a 20-13 toward the end of the second quarter, Valley’s Kenda Watson hit a clutch layup while drawing a foul to give the Lady Rams some momentum heading into halftime, but it was still 20-15 Loachapoka.

After the run, things fell apart for the Lady Rams as they only scored two more points for the rest of the quarter.

Loachapoka scored 15 in the third quarter to give the Lady Indians a 35-25 lead heading into the fourth quarter.

The Lady Indians increased the lead in the fourth quarter thanks to a few defensive blunders by the Lady Rams, and Loachapoka scored 18 in the quarter to secure the win.

Grimes knows that the Lady Rams still have work to do before their next game.

“It’s one of those things where I have four seniors, and they should know that a game has runs,” Grimes said.

“You just have to stay in the fight. Sometimes, the hole just gets too big.”

Grimes knows that they have to work on defense.

“We have to play better man-to-man,” Grimes said.

“It’ll definitely help when I get Jaylah Sturdivant back. We have to get better on defense.”

Sturdivant had knee surgery on Tuesday, and Grimes is hopeful she’ll be back in January.

The Lady Rams will travel to Auburn on Friday to face Eufala in a tournament.

“We have to work on defense,” Grimes said.

“Eufala shoots the ball well from the outside. We have to rebound better too. It’s nice to have more than a day of a break. We’ll shoot on Thursday and then play on Friday.”