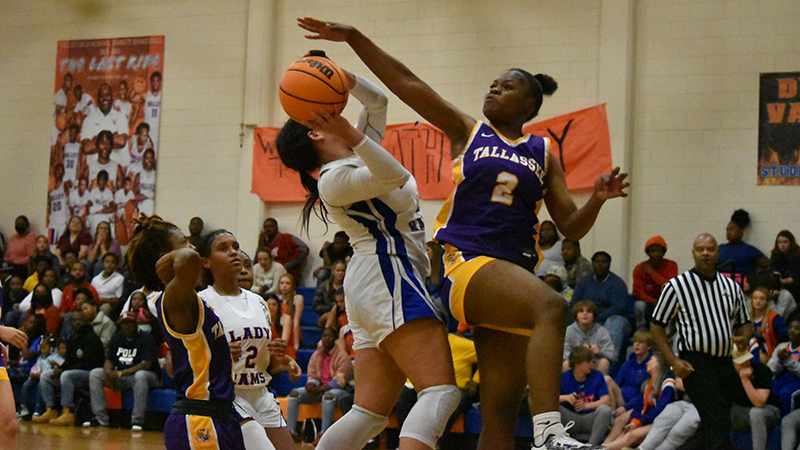 A stout defense led the Lady Rams to a much needed 39-25 win over the Tallassee Tigers on Monday at home.

“We had a little intensity on defense. We just had a good night. The girls stepped up to the challenge in area play.”

The game started out rough for the Lady Rams, who committed a technical foul only 34 seconds in.

The Lady Rams scored seven unanswered thanks to Kenda Watson and took a 7-2 lead early in the first quarter.

The Tigers bounced back and tied the game up at seven, but it didn’t last long.

The Lady Rams ended the first quarter up 10-7, and their defense continued to suffocate the Tigers as they started creating traps on the perimeter.

Valley only allowed two points in the second quarter, and they took a massive 21-9 lead heading into halftime thanks to Kenda Watson’s nine points.

Things got a little chippier in the second half as both teams started playing full court press.

Tallassee’s defense started to stifle the Lady Rams, but Valley went into the fourth quarter up 30-16.

The Tigers started creating turnovers in the fourth quarter, and they took advantage of a tired Valley team.

The Tigers went on an 11-0 run to start the fourth quarter, but the Lady Rams were able to bounce back.

Grimes was happy with his girls’ efforts despite being a little tired.

“It’s still the middle of December. We played two games on Friday and Saturday. We’re a little tired. We’ll drink some fluids. Most of them will have a half day of school because of midterms, so they should be able to get a little rest.”

Grimes knows that it’s important to open up area play with a win.

“There are only three of us in the area,” Grimes said.

“We’re leading the area right now, so that’s a big motivator for us. We have to build on our hustle and our defense. We have to play Loachapoka tomorrow. They’re a well-coached team. We have our opportunities to get better.”

The Lay Rams were the perfect picture of consistency scoring 9-11 points each quarter.

Watson was the leading scorer for the Lady Rams with 10 points.

Darcee Wright and Aniyah Robinson were both second in points with six each.

The Lady Rams will face Loachapoka on Tuesday before they prepare for the Auburn tournament over the weekend.