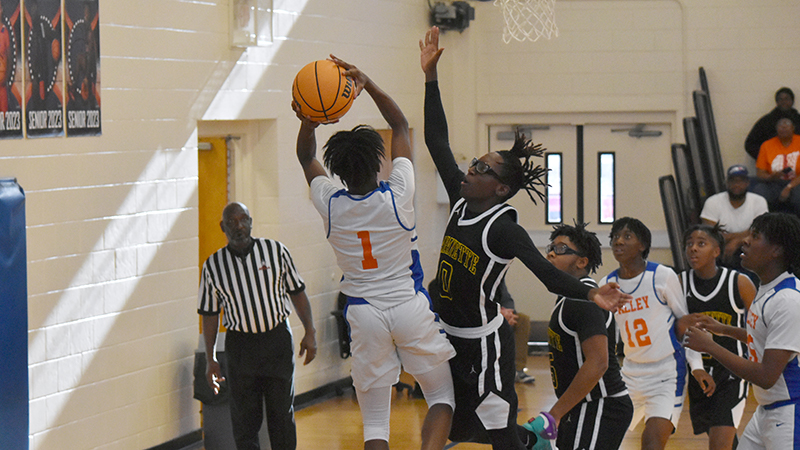 The LaFayette junior varsity boys traveled to Valley to try and win the Mike Powers Holiday Classic, but the Valley Rams proved to be too much and handed the Bulldogs a 66-47 loss on Tuesday.

LaFayette defeated Troup County 53-51 in the first round, but the Bulldogs were tired as they had to play a tougher Valley team only an hour and a half after the first round.

LaFayette head coach Anthony Kyles was pleased with the close win over Troup.

“They were struggling, but I talked to them about the things we practiced,” Kyles said.

“We go through pressure practicing against the varsity team. They didn’t let the moment get a hold of them. They got better after I talked to them a little bit. It was a tough win. We got off to a slow start. We were unfamiliar with the territory. We’re just trying to teach these young guys how to get to the next level. I was really pleased with our ability to close the game out after blowing an eight or nine point lead. Sometimes just winning the game is good enough for me.”

The Bulldogs kept things close in the first quarter of the Valley game as there were three lead changes.

The Bulldogs took a  13-12 lead heading into the second quarter, but fatigue started to settle in.

The scoring was evenly distributed for the Bulldogs in the first quarter as Amelion Hughley, Tae Lloyd and Zae’lyn Todd each led the team with three points.

The second quarter opened up with another three lead changes, but the Rams slowly started to pull away.

Valley had a 10-0 run in the second quarter, and the Bulldogs found themselves in a 30-20 hole heading into halftime.

Lloyd led LaFayette in scoring at halftime with five points.

The third quarter started to reveal more of LaFayette’s fatigue as the Bulldogs’ defense let up 20 points in eight minutes.

LaFayette was able to close the lead to 40-35, but they ran out of gas.

Since Valley didn’t play a game before LaFayette, they were able to use the fourth quarter to secure the lead and rest up a little bit before the championship game only an hour and a half  later.

Kyles knew Valley was going to be a difficult matchup no matter what the circumstances were.

“The first game played a big factor in terms of fatigue,” Kyles said.

“We only had 10 players. They had some energy in the first quarter, but it started to fade around halftime.”

“They killed us on the glass,” Kyles said.

“They were much bigger than us. They got us on the half court trap. We didn’t handle the trap well. The kids can learn to fight through adversity in a hostile environment and use their talents to make their teammates better. We had to play a team who beat us twice after already playing a game. They were so much bigger than us. Their traps were the biggest factor.”

Kyles was still pleased with one part of his team’s performance.

“They learned to not fear an opponent they haven’t played before. They played as best as they could under the circumstances.”

LaFayette’s six fourth quarter points prevented  them from mounting a comeback, but they were still able to rely on Tae Lloyd, who finished with a team high 13 points.

Valley’s Jayden Weaver, Galvin Goss and Zan Woody were all the leaders scorers for the Rams with 11 points each.

The Bulldogs will play Handley on Thursday.