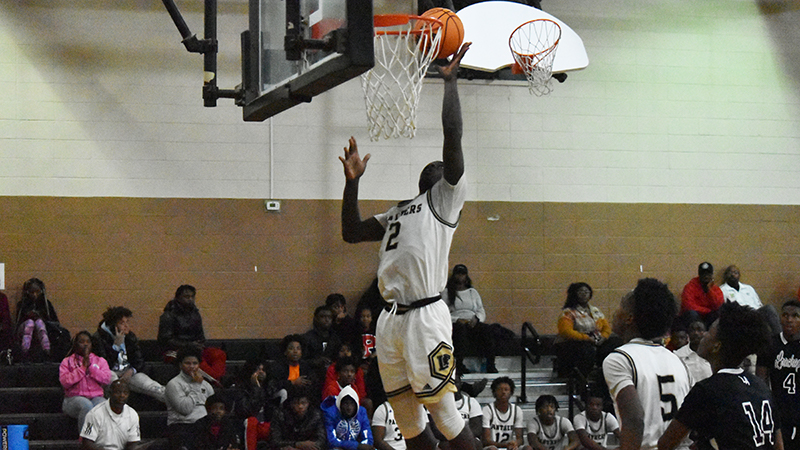 It took two and a half weeks, but the Lanett Panthers finally played their first home game of the season, and they walked away with a 47-42 victory over the Loachapoka Indians on Tuesday.

While it was the first home game of the season for Lanett, the Panthers were forced to play at the Lanett Rec Center due to the field house construction rendering the gym inoperable.

Lanett head coach Tay McCants was proud of how his team kept the lead toward the end of the game.

“They just stayed together and kept fighting,” McCants said.

“I thought we caused a lot of turnovers. We got a lot of rebounds, and we capitalized on turnovers.”

The first half was a series of ups and downs for the Panthers as they came out strong taking a 10-5 lead in the first quarter.

The Panthers were shooting well on the perimeter and succeeding in the paint, but things started to turn as the Panthers gave the Indians plenty of chances at the free throw line.

Loachapoka never took the lead in the first half, but the Indians did start to close off passing lanes, and that gave the Panthers some trouble getting the ball in the paint.

The Indians scored four unanswered toward the end of the second quarter to tie the game at 20, but Lanett’s Tashawn Staples hit a three pointer as time expired to give the Panthers the 23-20 lead at the half.

The second half was a slow start for the Panthers as Loachapoka scored five unanswered to take a 25-23 lead.

The third quarter was a back and forth battle as neither team led by more than four until the Panthers hit two three pointers to end the quarter and take a commanding 37-31 lead heading into the fourth.

McCants was pleased with how his team shot the ball.

“We came in at 10 this morning and just took some shots,” McCants said.

“We haven’t been shooting well all year, but it comes with a lot of practice. This morning helped us in the game.”

Lanett looked like they were going to run away with the game when they took a 39-31 lead to start the fourth quarter, but Loachapoka quickly scored seven unanswered to close the Lanett lead to one.

The Panthers never led by more than three for the rest of the game until a Jarrious Goodman layup gave the Panthers their final 47-42 lead.

One area Lanett struggled in was fouls, but McCants trusted his players to overcome the foul trouble.

“They don’t worry about the fouls,” McCants said.

“I do. They just keep fighting. They don’t even know how many fouls they got, they just kept playing. That’s how we take care of it.”

Even though the Panthers couldn’t play in their own gym yet, McCants is pleased to finally play at home.

“We’ll be back in the gym after the break, but it feels good to have the Panther nation behind us.”

McCants was pleased with how his guys performed on the boards.

“My assistant coach, Quay Boyd, has done a great job working with the guys in the interior. They were finding bodies, and boxing it out.”

McCants knows they still have work to do before they face Troup County on Thursday.

“We have to get some rest,” McCants said.

“We need to talk more on defense.”