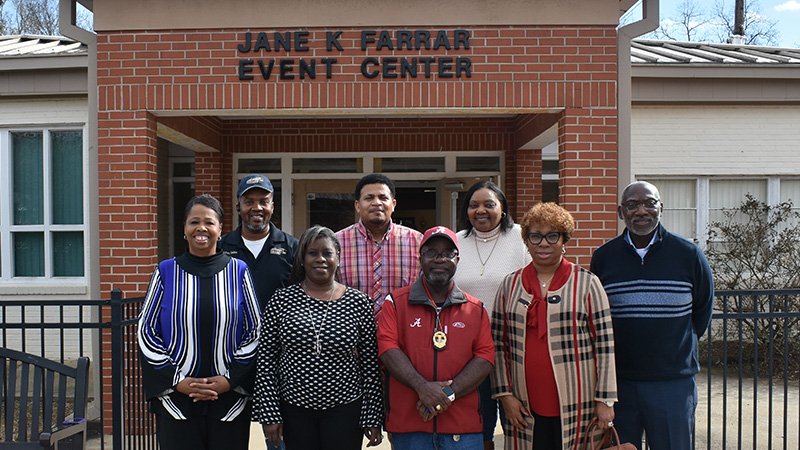 LANETT — Teddy Morris has held a full-time job for 40 years now. He’s been a firefighter, police officer and city inspector over a four-decade career. Most people would say he has earned a good retirement, but Morris is the kind of guy who wants to stay active.

He was honored by City of Lanett officials on Friday for the years he has served the city in many capacities. His retirement from the city becomes effective on January 6, 2023, and he’s looking for a part-time job to keep him busy.

He has one part-time job with Davis Mortuary in Valley and would like to stay busy with a second part-time position.

The Jane Farrar Event Center was filled to capacity for his sendoff during the noon hour on Friday. He sat at a big table just inside the front door and occasionally had to wipe away tears of gratitude as family members talked about what he had meant to them over the years. One of his cousins said Teddy has always seemed like a brother to her. His sister Bettye Tyner wished him well in a future career she knows he will be taking. “We thank God he was always there for us,” she said. “He has been a big part of our lives for a long time. We thank God for him.”

Lt. Patrick McCullough told the big crowd that he had learned a lot from Morris in the 10 years they had worked together in the Lanett Police Department. “I have always been impressed with his honesty, and the way he treats people,” he said. “He is exceptional in the way he can always keep his cool in any situation.”

He’s widely known as a dependable employee, and has had no trouble in getting a job when leaving a department.

Teddy and wife Tammy have been married for close to 45 years. They’ve had two sons. Terquez died of cancer in 2012 at age 34. Their surviving son, Tedrickus, lives in Panama City, Florida.

“I have enjoyed working with the city and its people,” Morris said. “I have enjoyed the opportunity to travel and to meet people from all over. I have been fortunate to have worked in Lanett, Valley, West Point and in Troup and Chambers County. It has been a good ride for me working in police departments, fire departments and as an inspector. I am grateful to have done what I have been able to do.”

Mayor Jamie Heard presented Morris a plaque thanking him for his long-time service to the city.

Morris is glad to have made it to retirement but does not plan to be inactive. He hopes to take off a month or so before getting back into some kind of part-time public service work.