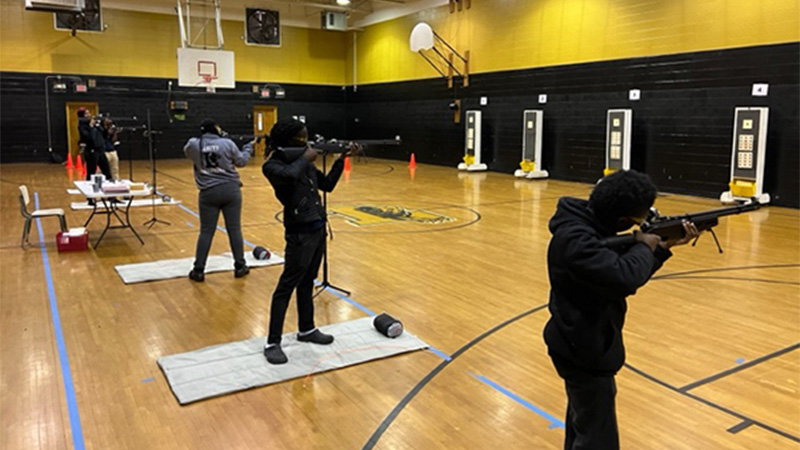 In late July, the JROTC Air Rifle Program was inspected and approved by a national marksmanship program. The shooting range underwent a lot of preparation in order to meet the safety criteria of the program. Senior Army Instructor Retired LTC Christopher McKinney ensured that all safety requirements were in place, such as inner locks on the gym doors.

“A lot of preparation went into that, and then we fired the week before we went on Thanksgiving break,” McKinney said.

Of the 100 students enrolled in the JROTC curriculum, only 25 are in the Air Rifle program. McKinney explained that in order to join students must become trained and certified by passing a test with a score of 100%. McKinney said even then, they didn’t allow freshmen, who have less experience, to sign up.

The goal will be to set the range up for practice twice a week. Students will practice for approximately an hour. The range is completely mobile, so it can be moved and set up as needed throughout the week.

The three-position air rifle shooting is taught and practiced in JROTC programs nationwide. The programs use 4.5 mm air rifles to shoot targets at a 10-meter distance. LHS JROTC is using the latest model of air rifle, the Crosman Challenger rifle, with all-new scopes and accessories.

The sport is a high school and NCAA college sport. According to McKinney, cadets can earn scholarships through the program. The national Marksman program offers general fund scholarships of $1,000 and $4,000 per semester.

Beyond academic advancement, the program also helps important life skills such as discipline, self-control, commitment and teamwork. McKinney said the most impressive part is seeing the students master a new skill.

“I like the fact that they go from zero knowledge to learning how to master the skill. This is something totally new, and they take on the challenge of learning the safety and how to execute the air rifle,” McKinney said. “That’s big for your confidence in life.”

Part of that confidence comes from well-established weapon safety training. McKinney said that every student learns important lessons, such as treating every weapon like it’s loaded and never putting a finger on the trigger until it’s time to shoot.

Range Officers are present during the training. The students learn to take direction from the RO throughout the training. Everyone in the range learns and follows special protocols to ensure there are no accidents around the weapons.

“You treat every weapon like it’s loaded, even if it’s not,” McKinney said. “We take for granted that learning about weapons safety is important because they may not be big weapons people, but they’re going to be around weapons.”

Crosman Corporation has announced a partnership with nearly 600 JROTC programs to be the official supplier of air rifles for nearly 14,000 cadets.