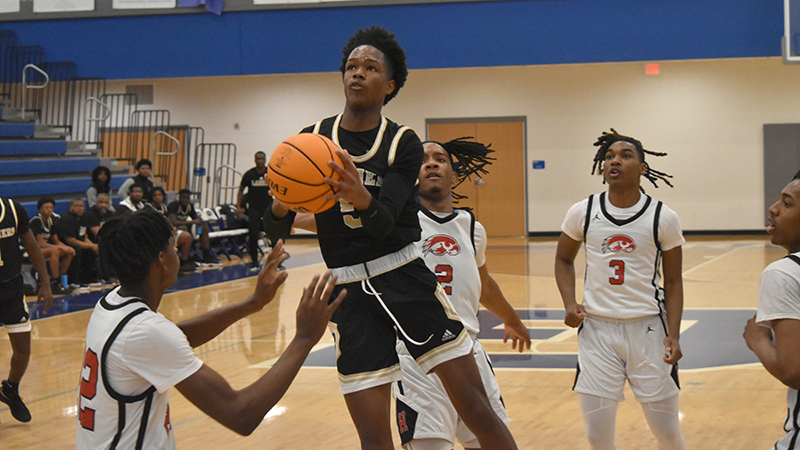 The Lanett Panthers finished the year with a trip to LaGrange to take on Hardaway out of Georgia, but the Panthers had several players out with illness in Lanett’s 57-40 loss on Friday.

It was another game where the Panthers came out firing in the first quarter, but Lanett was unable to hit shots in the other 16 minutes.

Lanett head coach Tay McCants knew that his team was going to be challenged.

“I had to play four ninth graders,” McCants said.

“I think they just got overpowered by the physicality Hardaway showed tonight.  We had some sickness and a couple of injuries, so we had to pull up some junior varsity guys. My guys did they best they could tonight.”

McCants wants his guys to work on shooting.

“We’ve been emphasizing defense to get a lot of turnovers,” McCants said.

“We have to start putting shots up at practice more. We need to start working on offense right now.”

Lanett only scored 17 points in the first half, but the Panthers did start hitting more shots in the second half.

Turnovers also continue to be an issue for the Panthers.

Despite the offensive struggles, McCants was pleased with his team’s defense.

“We were getting a little tired at the end of the second half,” McCants said.

“Our shots were way off, and tiredness came in, but our defense played well.”

Although his team was outmatched, McCants feels like his younger players gained valuable experience against a tough opponent.

“It’s going to benefit us in the future,” McCants said.

“People look at our record right now, and they’re underestimating us. We’re going to make a playoff run. We’re still going to make it to Birmingham this year because we believe in ourselves. I think our younger guys will benefit in the years to come.”

Lanett is young in general, and McCants is facing challenges with the youth.

“I have them playing so fast, and I hold them to the standard Lanett has always had, which is playing hard and no excuses. When the younger guys get together, they’re going to be OK.”

McCants wants his players to treat every game like it’s important.

“We want to win every game,” McCants said.

“We don’t care if it’s an area game or a non-region game. We have to start winning. When we start winning in January, we’ll be OK.”

Nakia Bynum was the leading scorer for Lanett with 18 points.

The Panthers will take a day off for New Years, but Lanett will be back at practice on Monday.