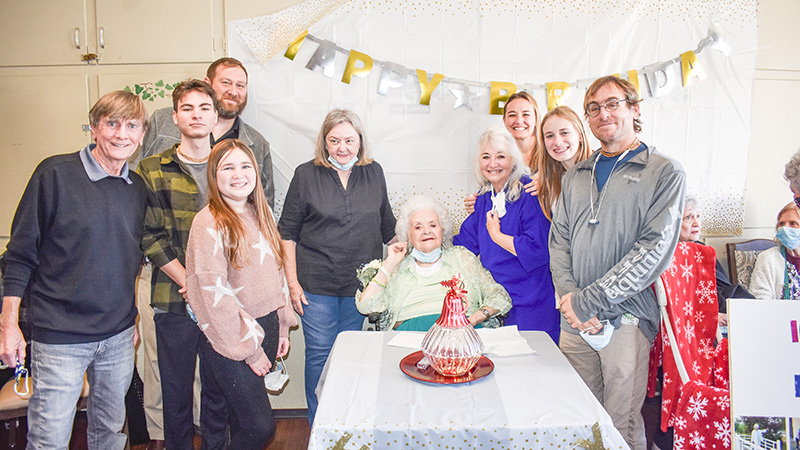 LANETT — This has been a big week for Dot Allen. On Sunday, she had her 99th Christmas and on Tuesday celebrated her 100th birthday. Lots of friends and family came to see her on her big day and celebrated with her in a birthday party held inside the activity room at Diversicare of Lanett, where she resides.

Inside tHe room was a big display board with lots of photos from almost every decade of her life. Appropriately, it was entirely “100 Years of Memories.”

Allen was born in LaGrange and spent her childhood there. When she was in her teens, her family moved to Lanett. She graduated from Lanett High School at age 16 in 1939. She’s almost certainly the oldest living former Lanett High cheerleader. A year ago, she received a Lanett High Panthers t-shirt as a birthday gift.

She got lots of presents from friends and family members this year along with some fun entertainment. A couple of contestants in the Ms. Senior Georgia Pageant, Sandra Thornton and Patty Tidwell, did their talent routines from a recent pageant. Thornton did a lively version of Tina Turner’s “Proud Mary.

The routine drew lots of applause from the crowded room.

Tidwell reenacted a skit made famous by Lucile Ball on “I Love Lucy” – the Vitameatavegamin routine. As anyone who has seen the classic scene knows, Lucy was attempting to sell on a live TV commercial a tonic elixir that was supposed to make you feel good. The elixir was said to have all kinds of vitamins, proteins and other good stuff, but what it was that made you feel good was the fact it contained 35 percent alcohol. The user was directed to take one tablespoonful after every meal. Lucy was directed to keep taking it during the infomercial and as a result got quite tipsy.

Tidwell is originally from Orange Beach, Alabama and now lives in West Point.

“I love being in West Point,” she said. “I met Dot and all the other ladies in the Active Life Group. It’s good to be active with people of your own age group.”

As a big blue and white “100” birthday cake was placed before Allen, three candles were lit and friends and family sang “Happy Birthday.” Allen smiled and waved her hands as if she was leading a chorus.

She will soon receive a large, framed proclamation from the City of Lanett, signed by Mayor Jamie Heard.

Most of her family drove down from north Alabama Tuesday morning to be present for the 2 p.m. EST birthday party. They had to drive through snow and ice to get there.

“I wouldn’t drive on ice for just anyone,” said granddaughter Michell Keel of Birmingham, “but my g-mom is really special.”

Allen was born in LaGrange on Dec. 27, 1922. She later moved to Lanett with her family and attended Lanett High in the airplane-shaped building on the same site where the W.O. Lance playground is currently located. After graduating from LHS, she went back to LaGrange to work in the offices of Callaway Mills for several years. She eventually moved back to the Valley to work in the offices of West Point Manufacturing Company. She was a member of the Little Theater and starred in many plays. In 1964, she married Ralph Allen. They lived happily for 18 years until Mr. Allen died in 1983. During their marriage, the Allens owned several businesses and were very active in the Lanett community.