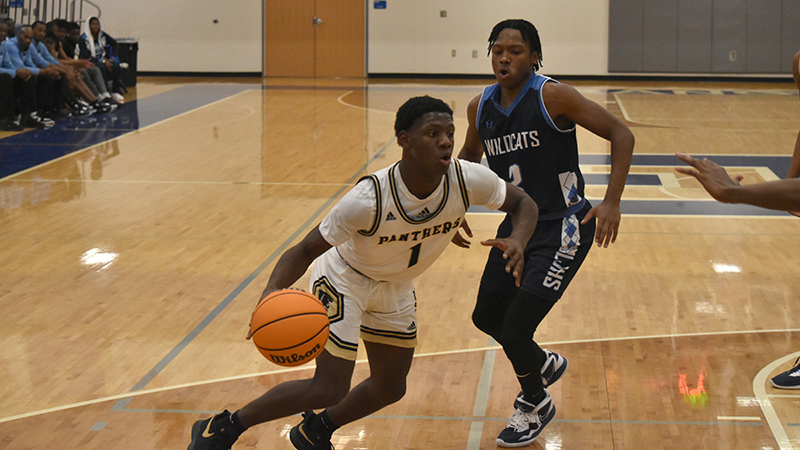 The Lanett Panthers traveled to LaGrange to play the Lovejoy Wildcats in the LaGrange Christmas Showcase, but second quarter turnovers plagued the Panthers in their 70-54 loss on Thursday.

The first quarter was dominated by Lanett as the players came out with confidence following their upset win over Troup last week.

Lanett’s speed proved to be too much for the Wildcats, and the Panthers took a 12-11 lead heading into the second quarter despite a buzzer beater by Lovejoy.

The second quarter was a different story as both teams were neck and neck until about three minutes in the quarter.

Lanett had three straight turnovers which led to easy points for Lovejoy.

Despite taking a timeout, the Wildcats defense kept forcing turnovers, and Lovejoy took a massive 35-24 lead heading into halftime.

“We were doing well on the defensive end, but we weren’t attacking the basket and making our layups,” McCants said.

McCants also wanted his players to keep their heads up despite the second quarter mishaps.

“I just have to keep giving them my energy, and I hope they feed off of it,” McCants said.

“I’m going to bring it every night, and I want my guys to do the same.”

The second half featured more hustle and better ball security from the Panthers, but second half efforts from seniors like Elijah Whitfield and Jarrious Goodman weren’t enough.

The Wildcats were up 54-34 at the end of the third quarter, but Lanett kept the game alive in the fourth.

The Panthers opened up the final frame with a 6-0 run, but they were only able to close Lovejoy’s lead to 14.

McCants knows that Lovejoy was a difficult matchup, but he feels like his team could’ve played better.

“They’re a big school out of Atlanta, but I feel like my guys had a chance tonight.”

This was also the only game of the season where Lanett played with a shot clock, but McCants doesn’t feel like it affected the game too much.

“It didn’t make a difference because we play so fast,” McCants said.

“If the shot clock says 35 seconds, we’ll try to get it off in 10 seconds so we can get up and down the court.”

Lanett won’t have much of a break as they play Hardaway on Friday, but McCants still wants his team to improve.

“We have to make layups,” McCants said.

“That was the difference in the second quarter. We’re going to keep playing hard. If we minimize our turnovers and play defense, we’ll be OK.”

McCants was still pleased with his team’s defense.

“I want to get a little more hustle out of my bench,” McCants said.